This project was the Visual Narrative Project. Our assignment was to create different pieces of digital art to express our personal way of storytelling.

Add a paragraph about what you valued from the Visual Narrative Project in all you classes. How did you improve as a storyteller and digital artist (visual and audio)?

The assignment in English was to create a short, engaging, and exciting story for readers to enjoy. We had to develop a story that was shorter than 5 pages and have an engaging storyline.My inspiration for this story was a fun idea I had while eating out with my friends one time. We were eating appetizers of rice and spices. I decided to form a small chunk of rice into a rice ball, then inspiring me to write a story about rice balls.

First, I had to record myself reading the story out loud. To do this, I used an audio recorder to record the story being read out loud. Afterwards, I put that sound file into adobe audition then added sound effects from a large library on the freestyle server.

I loved bringing my story to life with sound effects, making it sound like the story was recorded in the story, instead of me just talking into a voice recorder.

Jeff was a tall and thin teenager, with a laid back personality. He lived on a rice farm, away from the hustle and bustle of the city life. Daily life was calm, with a lot of time between every harvest for the rice cycle. Jeff and his best friend Jake filled the time by making little rice balls with faces on them, perfectly round and cute. His mother would always get mad, saying to stop playing with his food.
“Jeff! Stop playing with your food. I work hard to put this on the table and all you do is shape it into stupid little balls. Eat, then keep working hard!”

“Hey Jake.” Jeff said as Jake, his best friend, popped his head in the front door.
“Hey Jeff. You want to come out to the fields with me?”
Jeff looked over at his mother, who gave him a nod and continued her work on the house.
“How ya doing today?” It’s a beautiful day today, as they escaped the lecturing wrath of Jeff’s mother. The sun was rising over the horizon as the light glistened the water in the fields. The two of them and the rest of the community had just finished planting the rice, and had several months before the rice was ready to be harvested.

“I feel content right now. Everything has gone right in life so far.” Jake said.
In a state of wonder, Jeff started to contemplate his life. His whole life, he has lived in a rice farming community, farming rice. But something was lacking, missing from what he could have experienced. “There’s been something missing in my life, Jake, that I can’t just put my finger on right now. But what could it be? I have almost everything I could ever need. I live comfortably, I have a loving family, and my best friend always alongside me.”
“Aw” Jake replied quickly. “Maybe you could use something refreshing, a change in the way you live your life. Like, dude, you’ve been living here for how long? Like, your entire life? I have a slight feeling that you would want to do something new and not spend your entire life farming rice here.”
“You know what? I’m thinking of something absolutely insane, but I think you might like the idea.” Jeff said.
“I’m open to anything. Remember your last crazy idea? It was to put baking soda over an entire row to make it grow faster. That definitely didn’t work out well.” Jake replied.
“Look man this time I’m serious. I want to go to a big city, like New York or Los Angeles. I want to experience something new. The night life. The city life, what do you say? Do you want to come with me?” Jeff said.
“HA! New York? Do you know how expensive it is there? How far away it is? Its halfway across the country!” Jake then looked over to Jeff, who had a rock solid face.
“Oh heckles… You’re serious.”
“Yea I’m serious. Look, I’m not tryna waste my life here. I love helping the family business, but I’m hella bored here. It’s been the same thing for almost two decades. It’s time for a change.”
“Fine, go. But you have to be careful out there. There’s dangerous people, people who just want to cause harm to others. Manage your money. Be smart, that’s what you do best.”
The next day Jeff left for New York, with a disapproving mother giving him the thumbs up. “Follow something. If it is your dreams, then follow them. Find something, and put your heart into it, and success will follow.”
The following week, Jeff set out to start his dream journey. An early morning flight took Jeff out of his sleepy hometown to JFK, the airport in New York. He grabbed a taxi and rode into the heart of NYC, where he thought he would love to be. He moved into his small apartment, which costed a fortune. Tall walls tied to high ceilings and cement floors and large glass windows made for a luxury apartment. Views of the streets below show bustling commutes 24 hours a day. Bright lights shine throughout the city. Streets are always packed, cars carrying people to do their daily tasks. “Ah, the city life.” Jeff thought in his head. For the next few weeks, Jeff would live the best type of life that he could ever imagine. He made a friend, named Jeorge, who seeked the same type of lifestyle. Late nights out and tons of food made for the lifestyle he had always wanted. Day after day they would do exactly what they wanted, hanging out together and making the best memories of their lives.
One day, Jeff and Jeorge were going out for dinner at a steakhouse. Looking at the menu, Jeff was surprised at the prices. $70 for a steak! He looked at his bank account from his phone and realized he has little money left. From there, he went to the grocery store and bought twenty packs of instant noodles. That was his breakfast, lunch, and dinner for the following weeks. It was time for a change. Jeff decided to call Jake.
(“Yo Jake, I need money.”
“Dude, how about you sell rice balls like we used to on the farm?”
“Good idea dude. Thanks. Cya.”
Jeff then opened a business named Jeff’s rice balls. He sold two balls for $10. He made a lot of money. Jeff lived happily ever after.)

This is a screenshot of the interface of Adobe Audition. In the first line, that is the original audio file of me talking into the audio recorder. The second line is all of the sound effects that I added in. All of the audio files on the second line come from the Freestyle Audio Library. 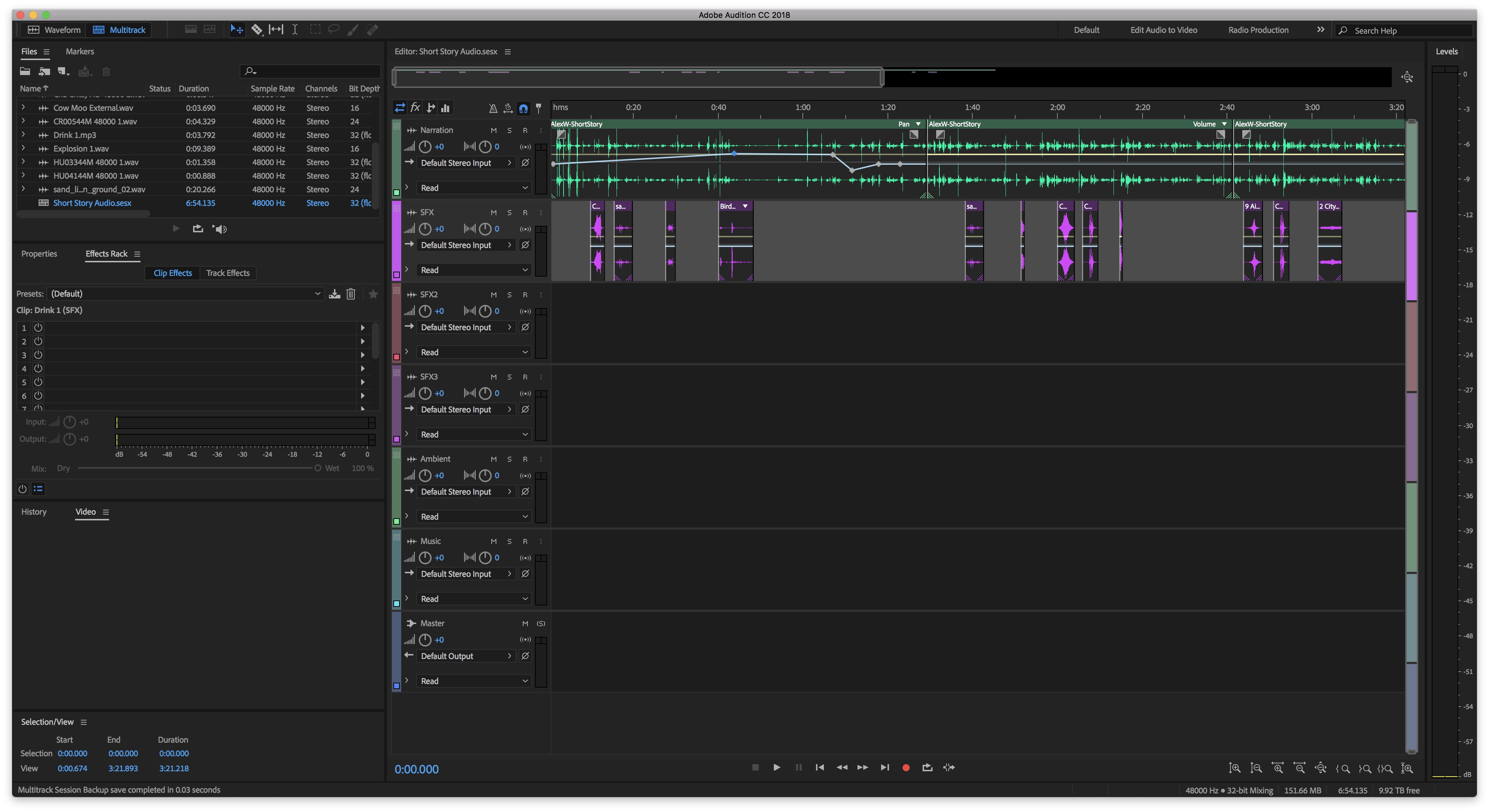 Here, we were challenged to make a short film showcasing our knowledge about Griffith’s pattern. In short, we showed the building in the first shot, then moved on to film inside the building and get an idea of what is happening inside.

In this small project, we were challenged to make a video displaying what we learning about suspense, and how to built it through different methods. The music, suspension of disbelief, and other factors went into our short film to show that we understood how to build a suspense scene.

Before any filming or planning of our narrative film, we had to write a page worth of text explaining what our film was going to be about. Here is what Josh, my partner and I, wrote.

Son is playing basketball in the driveway. Dad looks out window and sees son failing to make a basket or show any kind of skill related to basketball. The dad is disapproving of the kid, and the kid sees his dad looking disappointed through the window. Kid takes a moment to review what he is doing and questions what he can do to get his dad’s approval. After this moment, the dad comes outside and plays with the kid. The dad gestures for the ball and the kid pases. The dad makes a shot and the kid looks a little bummed. The kid then gets the ball and tries to shoot again, but he misses. The kid gets the ball, but the dad asks for the ball again and the kid passes it. The dad dribbles the ball and moves around the kid. The kid is a little reluctant at first, but he soon plays along. Then there is a montage of the kid and dad playing. He sinks every shot.
The kid eventually gets tired and sits down. The dad sits next to him and comforts the son. They both get up and the dad shows the kid the proper technique. After teaching him how to properly make a shot, the kid almost makes a single basket, but the ball bounces out. The dad looks at the kid, expecting him to be sad, but the kid is happy and starts dribbling the ball like he wants to play again. They play and the kid starts doing good and the dad misses a shot. The kid eventually out maneuvers the dad and sinks a three pointer. This part can be drawn out, with long dramatic shots of the reactions of both the son and the dad as they see the ball going into the hoop. At this moment, the dad sees that the kid has potential, but more importantly that the kid really wants his love and approval. The dad looks down at the sun and they are both smiling. The dad hugs his son and the movie ends.

Before filming anything, my partner and I had to create a storyboard, or a handdrawn photo of every shot that we thought was going to be in our movie. This is a picture of every card that we drew. 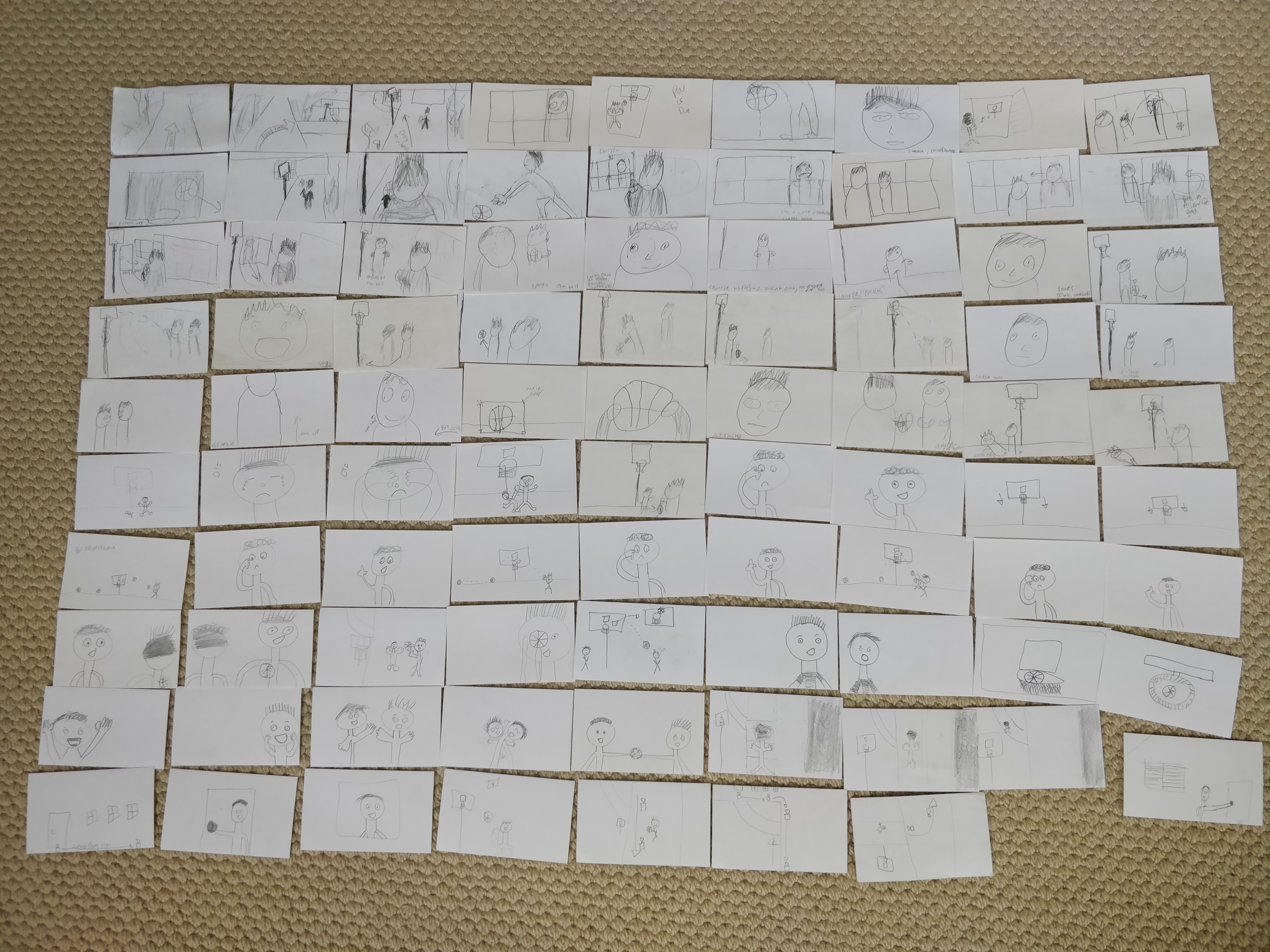 After finishing the final edits of the full narrative project, we were tasked to make a short trailer to show at exhibition. Short and fast cuts make the trailer feel suspenseful, making the watcher want to see the full film.

This is the final version of our film. We first showed off a rough cut, then recieved feedback form classmates and made improvements to our narrative film.