Welcome to my Conceptual page! Throughout this page, you will see a variety of pieces of art represented in photos, videos, writing  and music that I created through Design, Digital Media and English. Every piece presented here helped improve my skills in various applications and challenged my creativity to become more broadened. Each project is created in all three of our classes, using different techniques which we learn in either english, design, and digital media. In English, the pieces presented will be the photo haiku, free-verse poem and spoken word poems. In digital media, we made videos for a majority of our poems and worked on some music. Finally in design, we captured photos and developed them in class through applications such as photoshop. The efforts of each class were able to help me create this page which I am very thrilled to share with you all! I hope you enjoy!

A haiku is a traditional Japanese poem that consists of three lines, with the first and last lines having 5 syllables, and the middle line with 7. In English, we had a haiku assignment where we were each given a random conceptual statement that would be our inspiration for our haiku. My conceptual statement of this assignment was; I am exploring the feeling of nervousness through meditation. With the conceptual statement, I used it for describing a situation where despite there being no force of wind, waves are created.  To help further convey this situation, we were able to add a picture in the background to provide a new metaphorically perspective to the writing.

In digital media, we were able to expand this assignment by creating a video that would feature our photo with the haiku written on it and a soundtrack playing in the background. To achieve this, we used an application called Premiere Pro that allowed for me to add an audio of me reading my poem through a recorder and a soundtrack that I was able to put together through Premiere Pro. With this project, I felt very accomplished because each aspect was my creation and I was able to incorporated the usage of applications I had never previously used/ 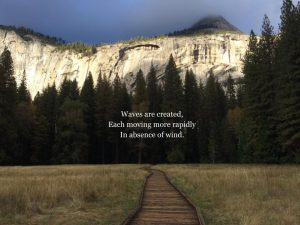 With this project, it initially began with a scenario in English where the class was split into two groups and each group had a mini project where a piece of paper would be passed long each member and as it was passed, each member would write a phrase in response to the phrase written by the previous member. Everyone had no clue the result of the poem would become so beautiful because everyone had no clue what the rest of the group had written except for the one phrase shown to them. In this project, we incorporated this poem into creating a video that had each individual’s audio of what they wrote as well as the picture they wanted to use to represent that line. Through the usage of the application After Effects, it helped me a lot to include everyones audio and pictures and have them play in order of the poem. While the project was initially difficult to insert all the audio and photos, I was able to get the hang of it and complete the project easier than I believed I could. The ending result surprised me because I didn’t think it would come out as efficient and not half as bad!

This is a screenshot of my Exquisite Corpse video production in After Effects. 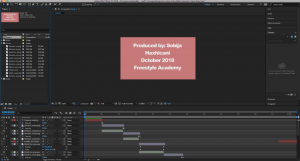 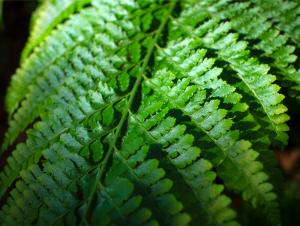 For my first project in Design, I chose to photograph a leaf of a fern. I intended to photograph because beyond the various objects and plants I captured photos of, this fern caught my eye the most. When taking this photo, I was mesmerized by the various tones of greens and the different types of texture each aspect of the leaf had. I thought with the purpose of macro photography to catch the details that other lenses wouldn’t have in as much depth, this leaf could be a great source. I shot this photo in midst of golden hour beginning, because I felt that this hour of day was not too strong of lighting from midday or yellowing from the golden hour, yet was just the perfect middle to allow the diferation of tones to pop. With this hour of day, the shadowing of the sun through the tree branches above allowed for difference of highlighting and showing among the leaf which I saw to be very beautiful and as mentioned before, emphasize the tones. In order to add depth , I attempted to shoot at an angle between over and from the side of the fern that allowed photo to show the drops of each strand of the leaf being pushed down by gravity. In order to enhance my photo even more, I used Photoshop to adjust the coloring of the photo so the different tones are expressed in a stronger hue. I tried to increase the saturation of the photo to help achieve this coloring. Also, I used a collaboration of the quick selection tool and healing tool to pick out pieces in the background that were distracting and I thought if removed would allow more focus to be brought to the areas of the leaf that I wanted. Through editing in Photoshop, I learned how to properly edit an photo to correctly bring focus to areas in my photo that I want the viewer to look at. In addition, I furthered my knowledge on adjustment layers and how they may be used to add hue and saturation to an image. Through the use of Photoshop’s tools and my camera settings, I was able to create a product hat helped develop my understanding with the elements of art and editing techniques that I will be able to incorporate in my future in photography.

The artist I chose for this project is a South African conceptual artist named Kendell Geers. His piece, “Master Mistress of my Passion” was created in 2010 and continues to be displayed in various exhibitions around the world. The piece entitled “Master Mistress of my Passion” by Kendell Geers is a sculpted structure of an individual sitting in a calm position while covered in sharp shreds. The piece itself is 87 x 60 x 75 cm and consists of Jasmine and glass. The individual sitting appears to be tranquil with their eyes closed, face muscles relaxed, slumped over with legs in criss cross position and fingers gently enmeshed together. The individual in this structure is completely naked and is coated with just the color white. Beyond the basis of the individual, there are multiple sharp shreds of glass that are cemented in the individual. The pieces of glass appear all over in various shapes such as  large, small, thin and big yet they are not quite present in the middle of the individuals face, feet soles and hands. These sharp pieces of glass are in various values of green and when conjoined together in a similar space on the individual, create even further different values of green. Each shred of glass also have a sharp end to them that provide an outlining shape to the individual itself. When finding a certain piece of artwork by Kendall Geer to observe and write about, this artwork caught my eye. At first, the individual sculpted in a serene position and covered in all white allowed for many peace revolved thoughts to arrive. The main essence for this was the detail that the individual was in the color white which on the color wheel often represents peace. This color usage of white allowed for my mind to emphasis the idea of peace among the individual entirely because despite the sharp shreds of glass in the individual’s body, they are in a very relaxed position both body and face wise. The color usage of the sharp shreds of glass caught my eye after and made me feel a bit confused because when observing the color of the pieces, they are all various values of green. With that being said, green is referred to on the color wheel as naturaistic and observing it being used as a something that was sharp and providing what would feel like harm and discomfort was alarming. I think that the message the author is attempting to convey through this piece of art is despite all of the unexpected obstacles and impacts the world can provide through both positively(light greens) and negatively(darker greens) it is important to remain as serene as you can with yourself. When viewing these various pieces of glass be stuck in the individual I feel sadness and anger because I am thinking the amount of pain they might feel. Yet, with the individual remaining relaxed, it allows me to understand that this pieces don’t affect who they remain to be; despite how much it may be impactful. This piece in result allowed for me to feel hopeful and inspired to continue my life with this calmness among the amount of situations I will encounter in my future.  In the artwork “Master Mistress of my Passion” the artist Kendell Geers conveys the concept of A woman’s face with nature’s own hand painted, Hast thou, the master mistress of my passion;

A woman’s gentle heart, but not acquainted. I unfortunately didn’t pick this message up from the artist because I believe I was too focus on the idea of the individual being calm and impacted by the various shred of glass rather than the actual gender of the individual themself. I also believe I didn’t take the title of the artwork too much consideration to it being the actual meaning concept.