Skip to Content
Home / narrative 1
Add text and images to introduce the Visual Narrative Project. Here’s some info that you could rewrite in your own words: https://www.freestyleacademy.rocks/projects.php?tab=2Add a paragraph about what you valued from the Visual Narrative Project in all you classes. How did you improve as a storyteller and digital artist (visual and audio)?
The assignment we received in November was the Narrative Story Assignment, which gave us all the creativity in order to tell a story from our own words. For my story, my inspiration was “The Shining”, which I had re-watched maybe a week before starting the assignment. I loved the fact that the music was scarce and used at random moments, horrifyingly creepy; and I wanted to recreate that for my Short Story. When creating the audio version of the story, I wanted to create the same sort of eeriness of The Shining’s infamous soundtrack. I made sure that when I read my story I paced myself so that I wouldn’t read too fast, too slow, just perfect. The sound effects that I added, although seemingly random at first, were placed right where I wanted them; which is in places where scary things were not happening, just to keep the listener a little wary of events coming up. I appreciate the chance to convert this to an audio version of the short story because I feel like a story like mine, which heavily relies on suspense and thrill, sound effects and a real voice speaking would help heighten that feeling. 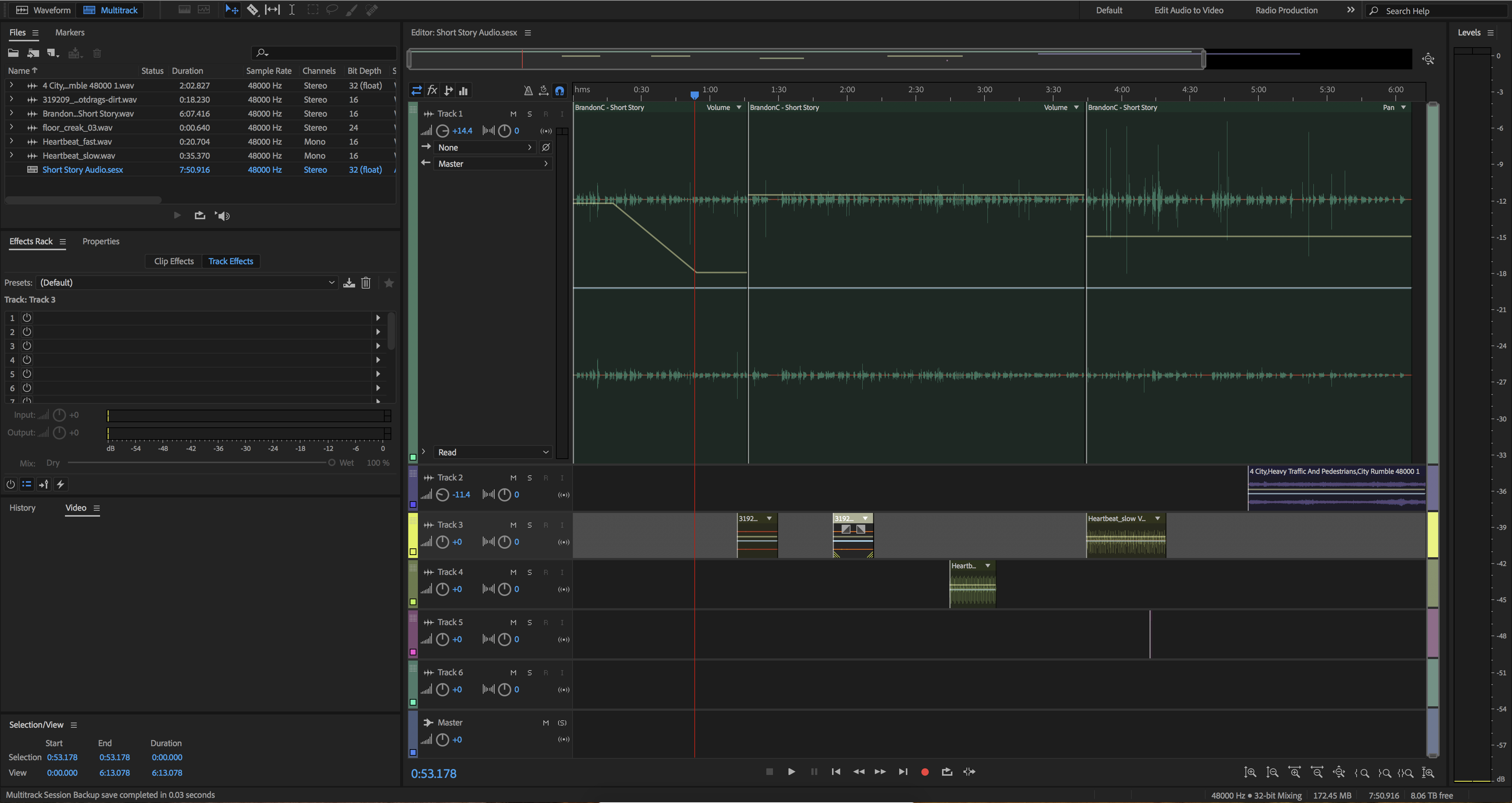 This interface is Adobe Audition. I used this application to place my recording of my short story and mix and master it. I added sound effects, fixed parts that were too loud, and made the story an immersive experience.

My story is a very dark, somber story about a girl’s inner battle with her demons. As I read the story over and over again more, I realized that I loved the idea of a disorganized, fast-moving GIF, or a moving image. So I went out with my friends at night and created these 4 GIFs, which I think capture the somber, old-school style of my story. I created them by first taking multiple pictures from right to left. Then in Photoshop, I adjusted the opacity and position of every single image so that they would coincide with the one before and after. Then, I set it was a frame animation, and that’s how you get an animated GIF.
In our animation class we were challenged to design our own animated character, and then create a walk cycle.