During the second quarter of Junior year, I was challenged to show my storytelling skills by depicting an original story line across multiple forms of media. This included writing a short narrative and designing a creature made up of several different animals, also known as a morgue.
Near the end of the first semester in English, I got the chance to write a short fictional narrative. To prepare, I read short stories such as The Flowers by Alice Walker, Stockings by Tim O’Brien, and Thank You, Ma’am by Langston Hughes. To develop my characters, I filled out in depth character sheet to help flesh out the narrative and write consistently. Part of the inspiration for my short story was a trip I had taken up to Arcata, CA, in April 2017 while going on college tours with my older sister. Covered by dense woods, Northern California has become known for its abundance in Bigfoot sightings. This became apparent with the large amount of stores full of Sasquatch merchandise. I knew I wanted my story to be based in Northern California and with Bigfoot being so prevalent in the tourist industry in that area, I was quickly drawn to the idea of a classic, if not stereotypical, cryptid sighting story. After several days of research I had blurry photos, dramatically vague accounts of strange noises heard in the woods, and a Google Maps search history that looked as though I was planning to move up north.

Marnie plopped down on the rock next to Alana, during what felt like the umpteenth break they had taken since starting out on the trail on this morning.“This is what happens when you hold yourself up in your room all summer. If you’re not careful, you’ll end up paler than me.” Marnie said, only half joking. Alana just glared back, but she wasn’t wrong. This was the first time they had been out for a proper hike since the start of the summer and Alana could feel it in her legs. She pulled the elastic out of her hair and attempted to smooth back the strands that had fallen in front of her face. Marnie stood up and dusted off the back of her shorts, attempting to get them moving again.“How is the job search going?” knowing full well that Alana had barely started the processes.“Real subtle,” Alana quipped.“What? You’ve spent all summer in your bedroom researching Bigfoot, time you should have been researching a job.”“You sound like my mother,” Alana said, studying the map of the trails that she brought.
A section of rocks is less stable than it looks and the ground gives way under the weight of her foot. Arms flailing, Alana tries to grab onto a dead branch that snaps off in her hand. She lurches forward and a sharp pain shoots up her leg as she over compensates, trying to find balance. Branches scrape against her arms and face as she tumbles down the hill. She lands on her side and can feel the rocks biting into her hip. Attempting to right herself, another wave of pain shoot up her leg. She must have sprained her ankle on the way down. A rustling sound comes from some nearby trees. She assumes that she must have scared a wild animal, maybe a deer or a large raccoon. Her eyes try to track where the sound is coming from, but she can’t focus because her head hurts. She must have hit that too while falling down the hill. She grabs her head and rubs her eyes. Something is definitely moving out there. It almost looks like a walking tree. She must have hit her head harder than she thought. That can’t be right.She fumbles to get her camera but her her arms are trembling. She knows she only has a few seconds to start filming before this moment is lost.

She is completely startled when a hand comes down on her shoulder. Her heart stops for a moment.

“Oh, my God! Are you okay?” Marnie pants, beads of sweat running down her face.

“Did you see that?” Alana whispers, the color gone from her face.

“Can you walk?” Marnie says, while offering a hand.

“Did you see that?” a little louder this time.

“The what? How hard did you hit your head?”

“Over there,” Alana says, while pointing towards a grove trees.

The trip was a blur of pain for Alana as she hobbled back to the car, using Marnie a crutch. The drive home wasn’t much better.

“I know I saw something.”

“Ya, a bunch of trees. I saw you fall down that hillside.”

“No, really, I saw something moving out there!”

“Maybe you spooked a deer?”

“But it was bigger than that!”

“Probably was that elusive 10 point buck that every hunter wants to find.”

Back in her bedroom, Alana notices that her camera didn’t fare well during her fall down the hill. There is a hairline crack in the camera’s screen and it is difficult to pull the SD card out of its slot. She slips the SD card into her computer, crosses her figures, and loads the video. Her breath catches as she stares at the blowed out video playing back in front of her.

“This is useless,” she sighs. 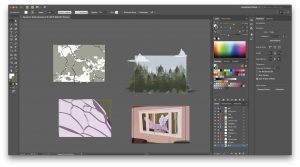 For the banner images used on this page, I used Adobe Illustrator to create images that related to my short story. The first image is a simplified map of the area around the Trinity Alps. The second is a forest scene because a large portion of my story takes place in the woods. For the last two, I used imagery from my Design project. 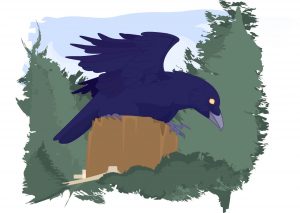 Drawing inspiration from my Design creature (see Design Process below), I wanted to practice drawing a full crow. The crow is resting on top of a utility pole surrounded by trees. I used a purple and yellow color scheme for the crow to make the feather details and eye stand out.
In my short story, Tree, you follow Alana Harris and her best friend, Marnie, as they explore the forests of the Trinity Alps in search of evidence of any paranormal activity.

My creature, representing Alana, consists of the body and head of a crow, the legs of a cat, the tail of a goldfish, and the wings of a bee. I chose these animals to represent some of my characters more prominent traits. She is observant, hyper with her movements, easily distracted by things, and generally anxious; each animal corresponds respectively with these traits.

Crows have a keen eye when it comes to finding small items that catch their attention. Cats are commonly seen as independent, lazy pets, however, young cats can be very hyper and require a lot of attention. If someone is told they have the attention span of a goldfish, it means they are often distracted or have a poor memory. Bumble bees are diligent workers but seem anxious if something they were not expecting gets in the way of them doing their job.

After writing down five personality traits that my main character had, I came up with different animals that fit each trait. Next, I pictured a scene from my story that my creature would best fit in and sketched out a few ideas to show perspective and layout. I searched for and downloaded pictures of the objects that I knew I wanted in my scene, such as a chair, a window, and the specific forest where my story took place.

I then put my chosen images into Adobe Photoshop, and used a masking tool to isolate out the parts of the photo that I wanted to keep. I rearranged the position of the objects to form the rough outline of my background, and used Adobe Illustrator to transform my photo collage into an illustration. I used a Pantone color book to find a color scheme to depict the mood of the scene. Finally, I repeated this process for my creature and combined it with the background to complete the illustration.