Skip to content
The Visual Narrative unit was all about telling stories without words, using the art of showing, and not telling, I was able to put several stories together in a way that I have never done before. Using these new skills changed the entire approach to telling a story, from the writing to the filming process.
The assignment in English was to write a short story using the skills we learned through the year. The audio was recorded with my microphone studio at home. The audio could capture more personality and it was more personal in a way, because more emotion could be captured though my voice. The story that my partner chose to work on was one of repetition, a boy who can’t seem get a break from the universe is constantly stopped on his way to school, forcing him to change more and more on his journey.

Dust on the side of the road is picked up by the wind as Adam continues his journey home, his converse shoes tearing from the years of abuse towards them. He opens his front door to a rather unusual scene, not only his parents, but also his brothers, are out of the house, In other words, he has it to himself. After quickly grabbing a bag of sweet sweet cholesterol, he tosses his backpack and makes his way upstairs and into the room.   Being alone is the perfect excuse for a teenage boy to do what everyone wants to. Adam makes his way towards the stereo system he bought second hand, being held together by tape and lost cds. Amongst the rubble of his bedroom a shining light seems to poke out of the dark. Adam obeys its call and begins to play it. The floor begins to shake with every strum of the guitar, and the windows hum along to the rhythm of the bass. As the music is too loud for him to think he comes to a realization, he didn’t have to be alone in the house. Dashing over to his phone he called his best friend and asked him to tell everyone to bring food, and come to his house. The best part about not being able to hear yourself think, is that you can give up on thinking all together. This of course is not the first time something like this has been planned, Infact, Adam has done it so many times that he finds himself quite invincible to the wrath and all seeing eye of his parents. Few hours of waiting a pacing later, his friends come over, with chips and other teenage delicacies.  Watching tv and other calm things are no cause for concern, and adam is sure he can get his friends to clean up before they go, but before he could think about how perfect his plan was, the sound of his doorbell is heard over the television. Another group of people, this time a group that he was less acquainted with come through the door. He didn’t see a problem with it, cause afterall, his parents wouldn’t be home for a long time, right? But this was not the end of it, one ring after another, the groups faded more and more out of people that he knew. Now this was starting to seemingly jar the overconfident lad. But this would not stop the event, he kept going with it, with the risk of seeming weird for wanting to shut it down. The next morning he wakes up alone, surrounded by the aftermath and destruction that occurred the night before. But he was in cleanup mode, taking the house from top to bottom, he recruited the help of the neighbor’s 10 year old son, paying him a healthy sum of 15$ for the job. The house was clean with the agility and speed of an 80s level workout montage. Before he could say rocky balboa, he parents were walking through the door, he had gotten away with it, he thought to himself. His parents were impressed to say the least, so they didn’t bother looking deeper into it, sitting down for a late dinner, the smalltalk was the same as it is every night. Until the boy walked in again, this time holding up an empty beer bottle, “What should I do with this” he said, right in front of Adams parents, blowing his case wide open. 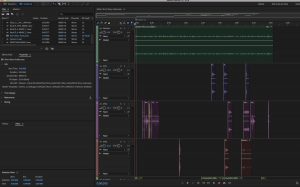 This image is a screenshot from Adobe Audition, and is behind the scenes of what it was like to record and edit my short story.

The Illustrations seen on this webpage were all either designed and created by me, or were screenshots from the film itself. 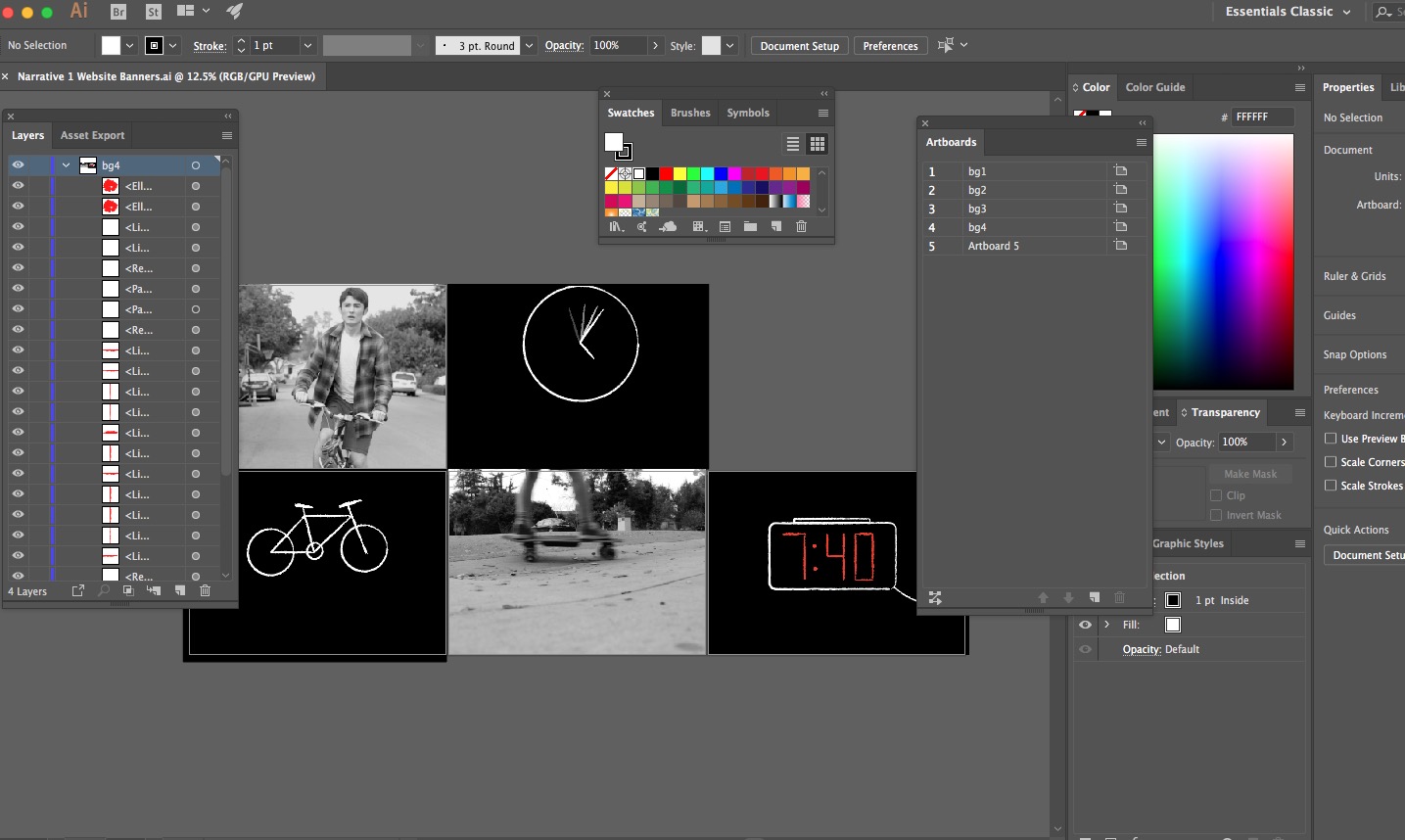 This is a screenchot from Adobe Illustrator, Showing the process of creating the images seen on this website.

In film, the goal is always to bring a story to life, story is king, and everything we do is to supplement the story. We learned about traditional film language, and how to put a sense of tension and excitement in a film without using dialogue.

(during this whole scene we can hear a droning of an alarm clock, slowly building up into the eventual alarm that will wake him up.) Starts at some lunch tables, a guy is looking at a girl and almost dozing off, leaning on his arm and just looking at this girl. Suddenly he is jolted awake by the school bell, right as the bell rings, it fades into his alarm, and we get a close up shot of his surprised and terrorized face as the shot pas over and shows the alarm clock display, showing 8:20 AM. He quickly jumps on his bike and rides fast as possible to school. When he gets there he can just barely see the girl again, just out of his range dipping into a classroom. The next day we can see him with the alarm going off again, but this time its at 730AM. He jumps on his bike and thinks he’s gonna make it just fine, right as he is leaving his driveway, a car slams into him, once again, making him late. The next day we see the alarm at 720, and right before he leaves the driveway he holds down both of his brakes, and a car goes rocketing past. As he is driving to school he realizes that his helmet was destroyed in the crash the day before, so he tosses it off the side of his bike, as he does this, a police officer’s siren blares loudly, startling him and further frustrating him. He pulls to the side of the road. And accepts his ticket. Getting to school he has just missed the girl again, but this time she can be seen walking with another guy, laughing and smiling at him, making our main protagonist Waking up the next day, he is greeted by his mother, she knocks on the door and throws 2 pieces of paper on him. One is a missing/late attendance report, and the other is the ticket. The next day we rinse and repeat, showing the clock, avoiding the car, and biking. But once again he hears the sirens stopping him once again, after pulling over he waits patiently for his verbal beating. But this is the last time for him, he has waited too long for this and is not willing to let even the law stop him from his goal. He runs throiugh the cop and through the red lights to get to school on time. He is pulled into the office and he is yelled at while we hear the riging of his ears and blurred people ripping him into pieces. He is sent into depentention. As he looks over and looses all hope, he looks over and sees the girl and wavves at her.