In Freestyle for our second major unit, we were tasked to create a narrative story that consist of a beginning , middle and end. In English class, we first wrote a narrative short story on a google doc. In order to reach the best score possible, the story should involve a good characterization of the main character or villain; the plot should be clear and using more describing than telling. The scope of the story should not be too big in order to keep the story short with a maximum 5 pages long and minimum of 2 pages long.

In this unit, I learn mainly about how to use Adobe Illustrator and how to write a better story. In Adobe Illustrator, I was able to acquire skills, like how the pen tool works, to create a vector based illustration. I now understand better how the application work compare to last year. I am also improving on my writing department skills wise.

The inspiration for my story is mainly from an animated short and a video game called horizon zero dawn. Both of these medium have robot, however one is how machine is hostile and can be tame, on the other hand the animated short give the idea of a innocent robot awake into a new world. I have the idea of having a relationship between Tom and the robot came from my previous story idea that I did not write due to how big of a scope the story have. I also use the history of the tribe as conflict, which is inspired from the horizon zero dawn and the rest of the story come from the top of my head.

Tom and the Robot

A member of the Last Ember tribe, Tom, a little boy with dirty and torn leather jacket walked out of a his rickety concrete house. As he snuck out of the stone brick temple for tribe intend for Tom to stay in, he stroll out through a small path surrounded by several collapsed golems. The tribe destroyed every golem on sight due to past family member passed away like Tom’s grand grandfather. He got piece though the heart by the sharp claws. The hunters are member of the Last Ember that are trained to put golem of commission. The rank of hunter can increase the pillvage of life for his family like living in a actual house.

He took a deformed tin can out his knapsack and tossed it onto the ground. As his eye scanned around multiple deserted, vine-covered skyscrapers, searching for some supplies that he could keep for himself, Tom booted the tin can forward. Clack! He thought how can an the plant grow out of hard rock. Clack! Tom got briefly distracted and switch back to his contemplation. These plants must be abnormal compared to the plant I grow back home. Clack! His thoughts continued to wander off and he thought that he wants his family to have better life by becoming a hunter when he grow up. Like my Dad… Clack!

Tom suddenly felt like there was someone or something staring at him.The steady gaze pierced his body and sent a chill down his spine. He frantically examined his surroundings as his view shifted around the wasted and corrosive steel wilderness and he thought he saw something but there was nothing there. Tom continued his stroll down the path toward some stair at the side of the path into a dark tunnel called formly a subway. At the corner of his sight, he saw a bright green light. Tom stopped in his track due his knowledge about the outside world – Golems have bright eyes. He knew that golem would not attack ones that do not move. The growing green eye slowly approached with the sound of the hulking foot step and the jaw of the golem coming into view bit by bit. Tom broke down and his legs begin to inches backwards. Tom wanted to backup toward the stairs. The golem changed his stance, appearing as if were about to charge, its colossal figure overshadowing Tom, but suddenly the robot sat upon its haunches.

Tom surprised at his change of event and exhausted from the experience. Even though he experienced this grim situation, he began to slowly approach it. Perceiving no hostile intent, he headed toward golem to find out that the robot was very friendly. This one in particular was very small and the golem acted like a little puppy. The surface was shiny unlike the ones on the surface that Toms see before. There was a red canister with transparent tube running through its inner body. Judging by the jaw size to the pillar on the side, it can easily crush one’s skull into smooth paste. Despite this observation, he still felt at ease with this little robot around for some reason. Tom relaxed his tense shoulder He started play with the robot and slowly befriending the robot by petting the robot first. Tom circled around the robot and find out that the robot’s tail is served and it seen that the tail used to be twice as long. Tom thought about a name for this robot and after many different name, Tom’s final name for the robot is Ember because despite the size of the robot, the personality is like a small tiger. After naming the robot Ember, he feel that he have easier time to warm to Ember. For a while Tom just talk to Ember about his family and him and how happy they to live together. Ember would respond with a head tilted toward the side. Not after long time, Tom and Ember started playing fetch.

They play around the wide grass field and a shadow figure slowly approach them. A group of man with spear jump onto Tom and push him away from Ember. One of the man said “ Get him to safety” as they slowly surround Ember. With his parent on his side, Tom slowly back off as he a group of animals with stone cold machine like eyes start to gang up toward Ember. Tom slowly reach out his hand toward the direction of Ember. Tom sprint toward the where Ember was. Tom run into the middle of the circle of hunters. The group of hunter backed off, Tom see a little cranky golem on the ground. The golem is torn up and almost bleed out. It can barely stand on it four legs and tremble every minute like a injured deer. The outlayer of metal had been ripped apart with the inner machinery exposed. Time almost stopped as Tom stare into broken Ember before him. He first look at Ember and then shift his eye to his family – his mom and dad. His eye rapidly shifted back and forth and stare at Ember as the sound surrounding him amplified and slowly mellow out. Out of instinct, he started to defend the robot as the hand out stretch. He scream with tear down his cheek: “Do not hurt him anymore.” Father of Tom run toward the hunters and tell them to back off. Ember was take to the courtyard and patched. Back at the tribe The leader of the tribe need decide whether they trust this robot or not.

He takes a brand new tin can out his knapsack and toss onto the ground. On the sidewalk of the stone temple, Tom boot the tin can forward. All of a sudden Ember come out of a bush and catches the can in mid-air. Tom cuddles with Ember and proceed to play with Ember on the green grass.

I created the audio file at home in my living room with laptop on one side while the recording on the other hand. This audio is recorded at night where everyone is asleep. I have to record twice due to how nervous I am and I stutter on some of my words. Since it was late at night, I was only able to record twice.

I value the learning experience of recording the short story since I don’t use the device often. I also learn how to use Audition to add sound effect and music to my audio recording. I also normalize the recording from a low volume to a normal level. The sound effect of the recording give the listener a visual image.

I created these illustrations in Adobe Illustrator app.  The custom illustration I created for my section headers are relate to my story.The first header of the website is a rainbow ribbon with a dark background.This illustration represent the tone of my story. Even though the history behind the main character Tom an his family is dark, the relationship between Tom and the robot is a light hearted tone. The rainbow ribbon represent all of the emotion the character went through during the climax of the story. For the second header, the illustration is a concept and general image of the robot with simple design. The robot has one eye and one sharp jaw. The robot has a color theme of black and green. The robot has red veins in the story and it is not shown certainly in the illustration. The green eye’s design is inspired by security camera.  The third header that you see above is the letter for friend in Chinese. The story is about the relationship between the two main character and how this relationship developed into a friendship over short amount of time. The fourth header design is created in Design class. The process is in the next selection. 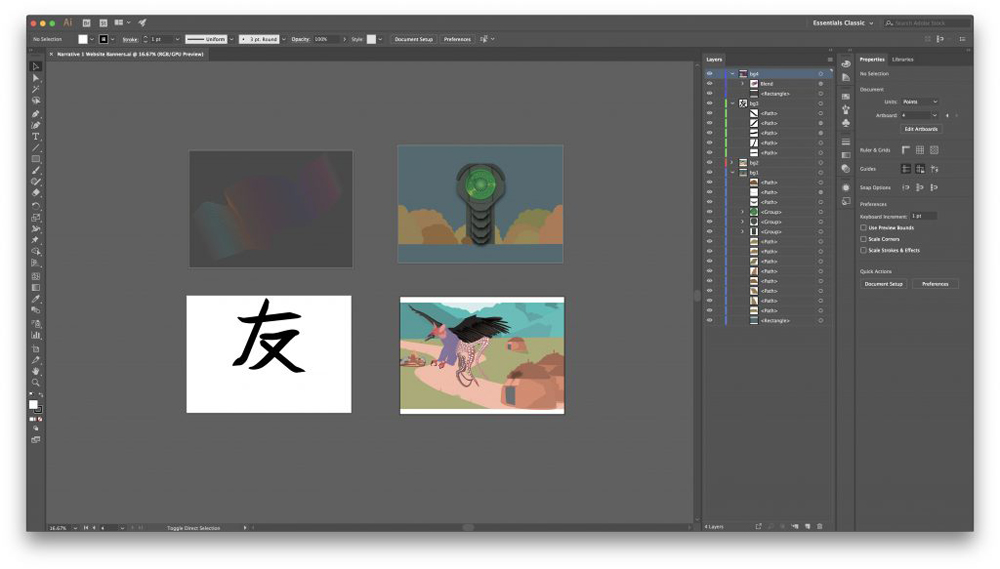 This is the workspace of Adobe Illustrator for the narrative website. Each header are drawn in individual art board. 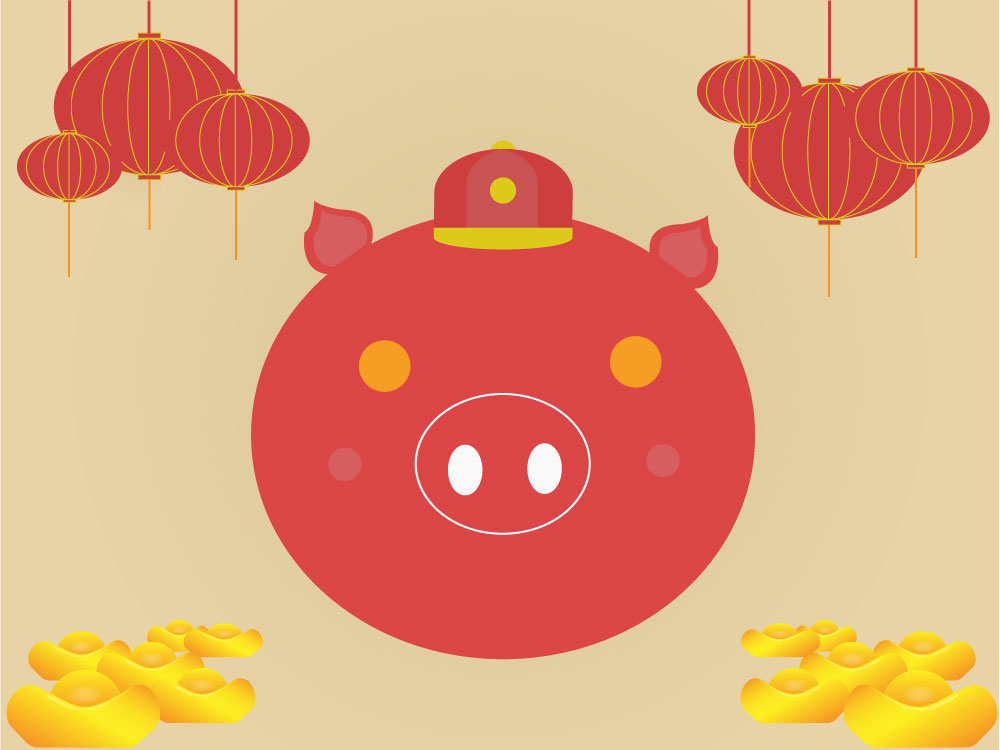 This artwork is about the New Year of 2019 and the Chinese zodiac is pig. This illustration consist of a pig in middle and the lantern and gold ingot on the side. Illustration is made in Adobe Illustration with the pen tool.

The design class for this unit is to create a illustration about the narrative story that we wrote in English class. The illustration’s main object is a creature mixed with physical trait of animal parts. These animal part represent the mental traits of the main character in the narrative story. Adobe  Illustrator is the main application we use to create the artwork below. 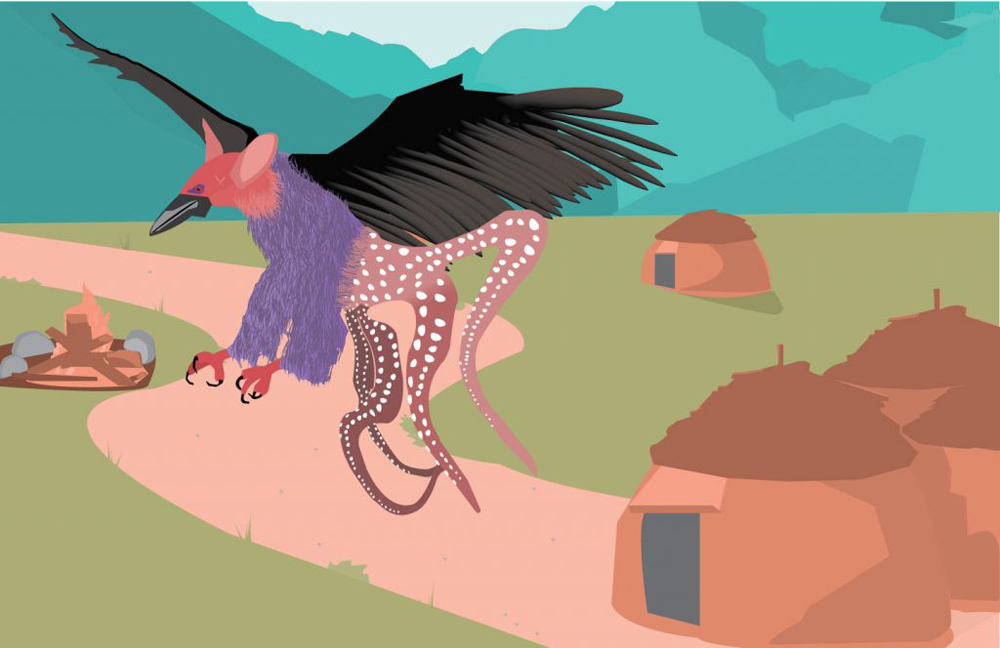 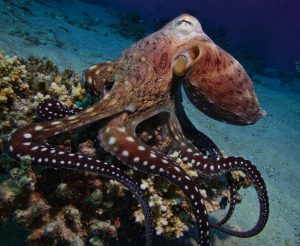 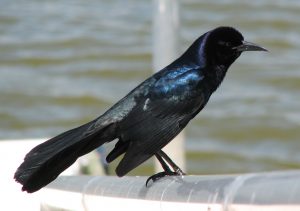 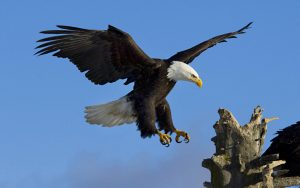 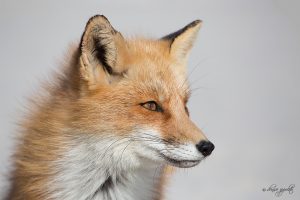 With all of the animal reference photo, I piece the all the photo together in Adobe Photoshop. The laying mask is key in modifying the photo to display the part of the photo I want to display. The benefit of the layering mask compare to the cut tool is the ability to restore the modified photo. 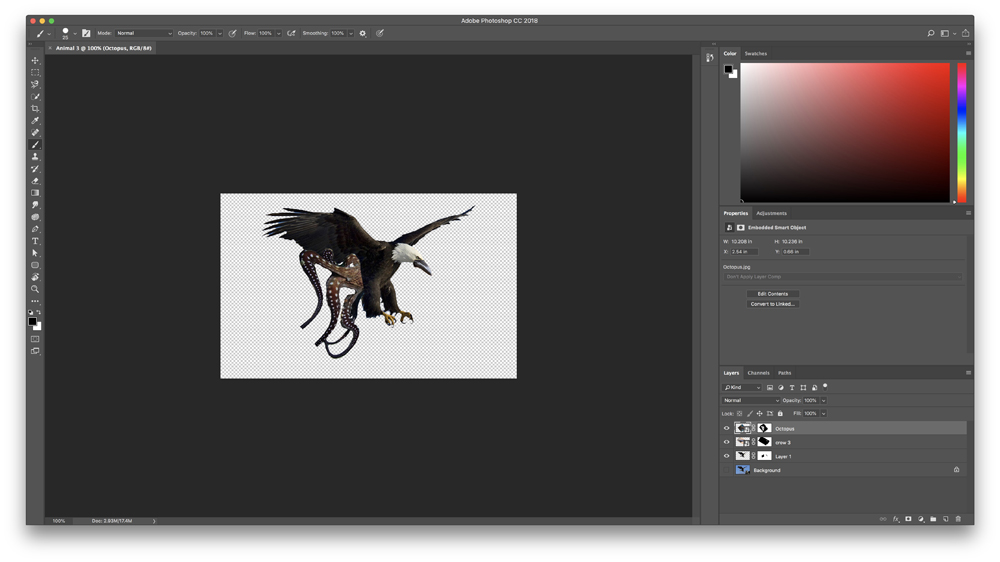 The fourth step is to create the both the background and the character in Adobe Illustrator. In design class we have choose a color set for both our background and creature. The creature color is red, purple, and neutral color like gray and black. The background of this piece consist of green, blue and orange colors. The pen tool is essential in creating the piece. Adobe Illustrator is vector base program. This mean that the drawing do not becoming pixelated with a bigger size illustrator. First, I work on the background. Then I work on the character. The hardest part of drawing process is to create realistic feather and fur of the creature. At the end, with Ms. Parkinson, I am able to create the texture and shape I wanted. 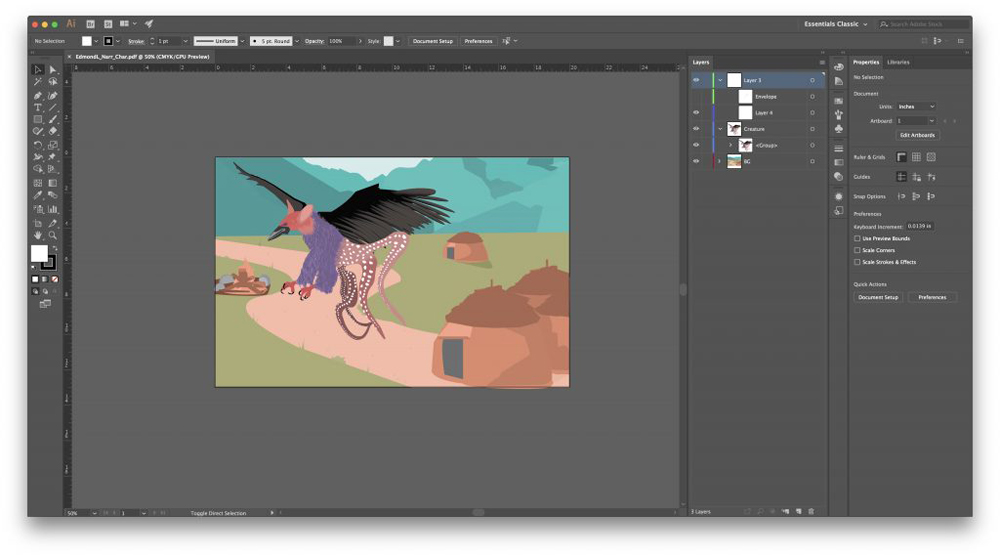 Finally I am able finish this piece of illustration at the end with a piece of Illustration that I can present to others and ready for printing. There is one last setback before printing – the shadow of the creature. The shadow is hard to make because the shadow do not blend in well with the Illustration. We decide not to have a shadow for the final print. 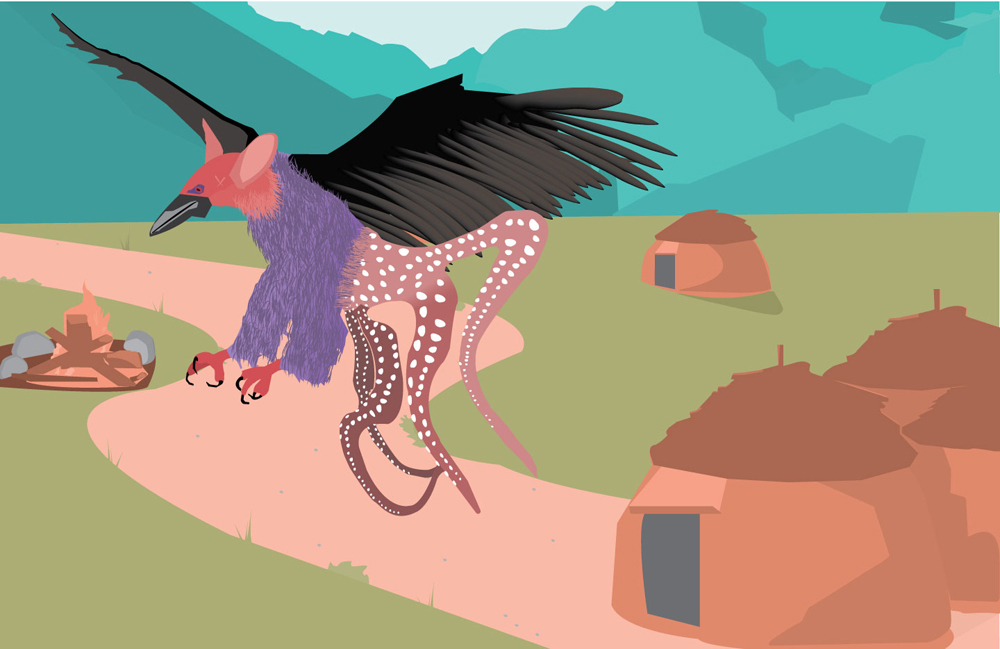