This unit really strengthened my skill to show, not tell. I worked on creating emotional connections with the audience through visuals, more than words.

With this assignment, we were tasked with creating an exhibit featuring a haiku and a photo, to creatively express an abstract statement I developed with some initial cues.

My abstract statement: “I am exploring the feeling of curiosity through the experience of stargazing.”

Here’s the result (I did a photo and a video): 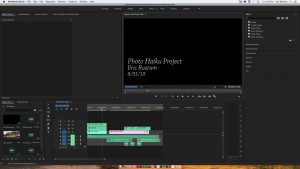 I’m not crazy about the video, which I created on Premiere Pro. I don’t like the sound of my voice and I’m not sure my voice-over added anything to the video. That said, I still strengthened some technical skills, like how to fade in titles in and out and how to create better transitions between the music and the voice and the end fade.

This was one of our first Freestyle assignments and it seems really simple, but I found it to be surprisingly hard. Maybe it’s because I chose imagery from a place that means so much to me (Yosemite), I couldn’t find a straightforward way to express the abstract statement with that medium. Our teachers set “requirements” for the haiku and it was like I was failing at a language translation: they would say, “We want to see this,” and I would share my initial ideas, and they would say to me, “No, that’s not it.” But even though I’m not thrilled with the final result, I realized eventually that this is how I work. I don’t think I have a million creative ideas, like some creative geniuses I know. I think that I have some ideas that sound great to me at first and then I’m good at sharing those ideas with my peers and my teachers and taking their feedback and suggestions on how to make things better.

In our English class, we created several poems that reflected the abstract statement we were given. Every line and word in our poems had to have some significance to our overall meaning in order to exhibit the themes from our statement.

For one poem, our assignment was to react to a piece of art at the Museum of Modern Art in San Fransisco. This poem, in which I react to a piece by Roy Lichtenstein, is called “Going Home.” 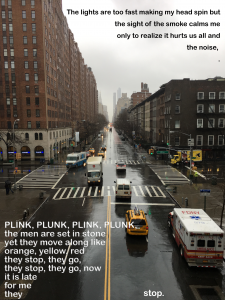 Here is an audio recording of the poem.

Another poem that we worked on was a free verse poem that had a more narrative approach to our concept statement. 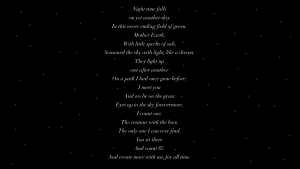 Here’s the audio recording of the poem. 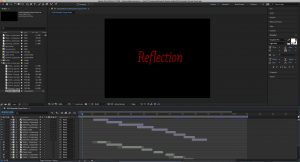 This video was made with Adobe After Effects. We practiced using the Ken Burns effect to zoom in on images, matching audio and video together, and using keyframes for other effects.

From these poetry projects, we learned the basics of abstract thinking as well as technical features on our cameras and editing applications. Although I did not like poetry before this unit, I think I’ve grown to appreciate it through these experimental processes. These are skills and concepts that I know I will highly value in future projects at Freestyle.

Blending Modes in Photoshop are various ways to alter images to make them look the way you want by blending different layers of the same photos or different photos together.  We took a vast amount of pictures to experiment with these features of Photoshop. 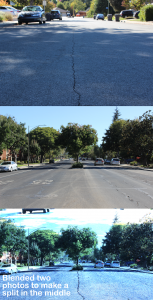 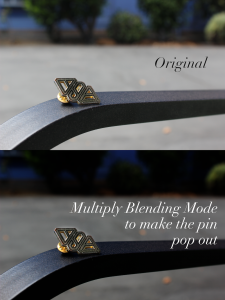 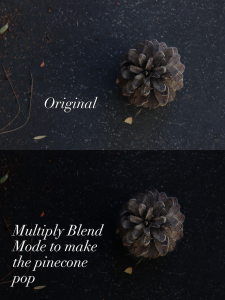 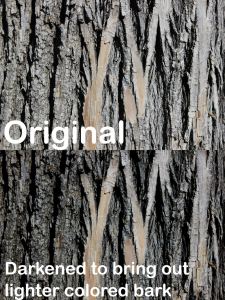 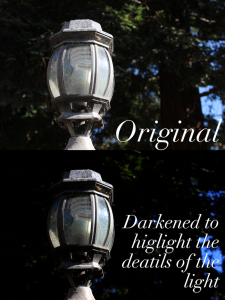 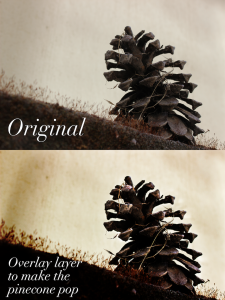 Blending layers to make it darker 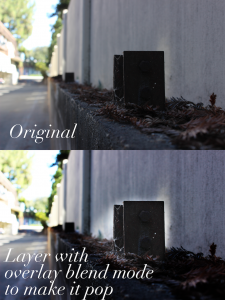 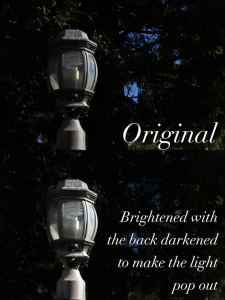 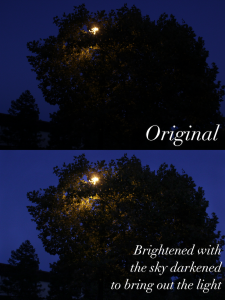 Blending layers to make it lighter 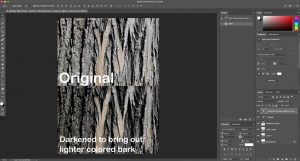 On the right is the layers panel where you can see that layers of the photo were duplicated and given the blending mode “multiply” to make the image darker. On the top layer, I used a digital white brush that is used on the multiply blending mode to bring out lighter parts of the bark.

Photoshop is one of the most useful applications in real world jobs, so learning how to edit these photos was a very important experience from these past few months. I will definitely use this to my advantage in the future.

With our first project in Film, we were tasked with making a film that experimented with abstract concepts that go against traditional story building. Instead of having a beginning, middle, and end, respectively, maybe the beginning comes after the end. Maybe the film isn’t bound by normal time, it could be slower or faster. These are the kinds of ideas that go with “avant garde.”

Here is the film I made based on my intention statement, “I’m exploring the feeling of curiosity through the experience of stargazing.” 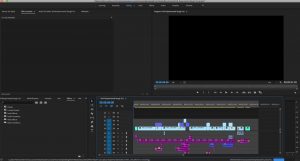 This is the project file for the film. One of the most important parts of my film was the sound, which I used a lot to transition between different settings smoothly. The sound also added to the mood I was trying to set. This project was a great opportunity for me to get back into using Adobe Premiere Pro instead of using Final Cut Pro.

This project has taught me the HUGE importance of showing, not telling. I had to grasp how to get a message across with no dialogue while keeping the audience engaged. No lie, I hated making this type of film at first. But I’ve grown to appreciate the way it’s made and the concepts exhibited.

Begin typing your search term above and press enter to search. Press ESC to cancel.