He wakes at exactly 7:28 to the sound of the radio. He looks for clothes but insists someone must have taken them all. He rummages through his hamper sniffing for something with at least a somewhat bearable odor. He leaves his building and stops at a food truck before walking to work and sitting down for the next 8 hours until he is ready to go home again. He learned a long time ago not to obsess over the time. 24 hours later, 7:28, the same thing occurs, same with the day after that and the day after that. The ground fills with strings of red rubber and the blood of working men’s fingers slashed from the remnants of trees destroyed by mankind. The repetitive sound of machinery lingers in the room… printers, shredders, sharpeners- printing, shredding, and sharpening. The noise would likely be too much for a man to handle, had it not been for the continuous conditioning over a span of what is soon to be three years this March.

A few hours later, he enters his apartment defeated. He sits on his bed and studies the cuts on his fingers, the scars of papers’ revenge. He is long and pale like an endless winter, but as prominent as a light breeze. He haunts, content in his own isolation. His bone structure is striking yet unnoticed. The curves of his face indent as if carved and shaded by Michelangelo himself.  One eye as blue as broken glass, and the other a deep brown holding an unusual beauty. His shoulders curve slightly, in a way that could be of a lack of confidence, or just the result of a bad habit.

He lies awake that night, age and indents on his ceiling, stories from past residents. He hears footsteps from the room above. They’re intrusive and seemingly choreographed, as if someone is following a routine, like 3 fast steps, and one big plop, and drumming, then a final thump, and the parade is repeated. And outside his window the air is sharp with sirens, and from the kitchen, the refrigerator makes a growl, too stationary to explain with any sort of miraculous detail. From the other side of the door, he hears a similar parade as the floor above, only with a different choreography. Running, and laughing, and yelling back for someone to catch up. Charlie is able to identify the noises as an infiltration of children, perhaps these are the kids who live across the hall, but perhaps another set of kids, whose children they are and where they live don’t make much of a difference. Charlie wonders how the same actions that make couples and individuals worship these little people, may cause Charlie such irritation on this night as he attempts to persuade himself into slumber.

Several similar days later, Charlie opens his eyes to a new sound…. Silence. He checks his clock and it reads 8:34. He rushes to work, and as he enters the building he hears a voice shouting, “Hey! Hold that, won’t you?” Charlie holds the door open to a familiar face. The man’s name is Alvin. Alvin has an unshaven face and unkempt hair. He’s wearing black sunglasses, even as they enter the elevator. Alvin’s clothes had potential to be professional, if they were worn correctly. His pants are a size too big and his shirt untucked.

They both ride up the elevator for what felt like years, in total silence. They exit together and walk in the same direction, Charlie keeps adjusting his speed slightly to avoid any more awkward conversation, or lack thereof.

Finally Charlie makes it to his desk and sits down. He notices Alvin sitting a couple desks away. Alvin is looking at Charlie, studying him. Alvin enters the bosses office and doesn’t come out for many minutes later.

Charlie can hear Alvin and his boss yelling in the office. He looks around and notices no one else is paying the voices any attention.

Alvin stumbles out of the office.“Look at yourselves,” Alvin shouts, gaining the attention of the few who weren’t already looking.

“Every day you’re in here, the only thing that you show any response to is the humiliation of others, well I’m standing here, telling you to be something more than a goddamn fly on the wall!” Alvin continues in a drunken preach. “Half of you don’t have anything other than this place, and of the half of you that are married only half would admit to being happy, and you would be lying. And now you’re listening to me and I’m just gonna be that crazy guy who you gossip about at the dinner table and forget about after a night’s sleep, but I’m done. You’re all zombies, no your worse than zombies, because you’re alive but you accomplish nothing, you aren’t worth anything, you offer nothing, and this guy right here – he knows this and he’s feeding off of it!” Alvin points at his boss, before being escorted out of the building.

Charlie is sure he is crazy, or at least drunk, yet still Alvin’s words haunted his head. He thinks about it the rest of the day, for which Charlie is honestly quite grateful,as something to dwell on makes the time go by way faster. “Am I too a zombie?” Charlie wonders.

He sits on a bench with defeat and contemplation in his eyes. He wonders if he made the right choice, spending his life dwelling on work. He looks up and notices a girl sitting on the bench next to him. She, like him, is a tad peculiar. She has pale skin and dark eyes. She is peculiar yet at the same time average, just like Charlie. Each detail could go unnoticed by the wrong people. Her presence drew Charlie in. He catches himself staring, and for the first time he knows this is no time for observing. He hears Alvin’s words in his head. “You’re alive, but you accomplish nothing.” He nods, talking himself into a state of courage. “Am I too a zombie.” He turns to the girl,

In digital media, we were asked to create the border headers you see as you scroll through my page. We used Adobe Illustrator and the many skills we have learned this past unit, to make unique images relating to our short stories. Mine are more simple than story. My short story is about simplicity and the routine of life. But in that routine, there is beauty. That is why I kept warming and happy colors, as warmth is something to focus on in contrast to the negativity often depicted in adulthood. 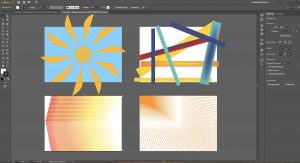 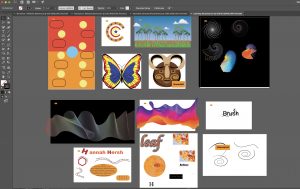 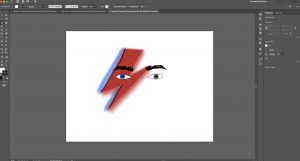 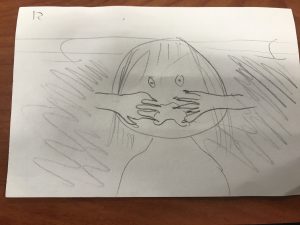 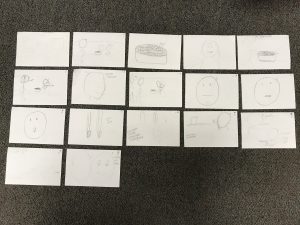 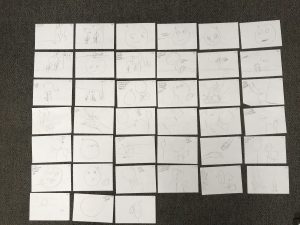 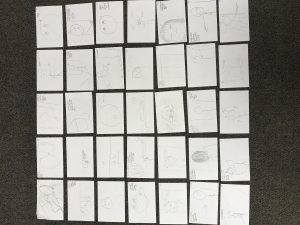 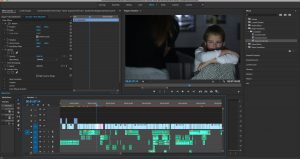