Skip to Content
Home / Narrative 1
The Visual Narrative Project at Freestyle was a very interesting process to go through, from start to finish.  We spent a lot of time actually developing the stories and characters, as opposed to working on creating something tangible the entire time. 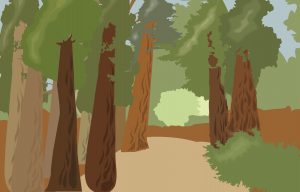 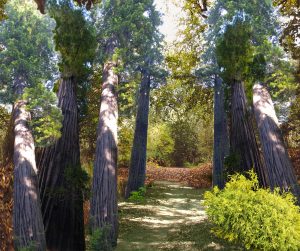 Here are the backgrounds that I made in Design. The part of doing the Narrative project in Design class which I valued the most was being able to create something out of thin air with little guidance, save for Ms. P giving us pointers on making the composition more interesting. It was also very comforting to be able to discuss and share this experience with fellow Design students. My friends and I would ask for each other’s feedback in regards to the illustrations.
This scene was taken from my Narrative Story, which we wrote and developed in English class. My favorite part of this aspect of the Narrative project was the creativity in characters, setting, topics, and overall composition. I greatly enjoyed a “speed dating” exercise we did to help develop our characters’ personalities.
In Digital Media, we recorded ourselves reading the story and added sound effects and ambient noises. I enjoyed this part of the process because I’ve always wanted to learn how to create audio books and podcasts, and through this project, I feel that I got closer to that process than ever. I’ve improved greatly from the beginning of this project primarily in the process of which I create things, becoming more efficient and able to focus better.
Our assignment in English was to write a short story using characters we developed in class. The story itself had to be between 2 and 5 pages, and have a clear plot line.The inspiration for my assignment was based off of my own fears as a child, of being lost in a new place and not being able to do anything about it.The character Vinnea and her experience was largely based off of a dream I had when I was about 13 years old.I produced the audio version of the story by using Adobe Audition, and adding sound effects to match the feeling and plot conveyed.The thing I valued most about the process of producing the story was getting classmates’ feedback on my story,and also learning how to use sound effects effectively in Adobe Audition. We developed the story itself in English class, using Design and Digital Media to produce the more intricate presentations of the story; the recording and the Narrative Illustration.

“Don’t stress Vinnea, it’s fine! Walk through the scary woods all by yourself with no weapons!” The girl huffed, stepping over a fallen tree. “Do this for the experience! Let yourself learn about nature for once! Yeah, right.”She took another big step over a pile of sticks and leaves that could be identified to most residents of Ocelatia as a nest. To Vinnea, however, a more recent addition to Ocelatia, it was just another obstacle in her way to somewhere she didn’t want to go to.The autumn was always beautiful in the western side of Peanira, and Ocelatia was one of the more well-known vacation spots for those rich enough to flaunt their ability to travel to a lower-class region. Those kinds of people were often from the eastern side of America, and often from New York, where Vinnea had lived, in the lower-class regions surrounding the rich centres. She sniffed, briefly remembering how Deyre had dropped his jaw in awe of her relocation.

“You know that living there is like having three servants here, right?” He excitedly drank his pop. It was that day, sitting on the school’s 10 foot high protective railing, where the realization of her leaving him had finally hit her. Deyre continued to gush about how her life was drastically improving and leaving him in the dust.“Well, I do know that I certainly will be living in the lower-class regions,” she looked to the ground far below, wishing that she would miraculously get stuck up here and never leave. “Mom hardly makes enough for us to stay here, I don’t think we’d exactly be living the Ocelatia dream,” She giggled, rubbing her nose in the frosty cold. Deyre had finished his pop and threw it down the ten-foot drop to the schoolyard.“Still, as awesome as your life will become, there’s no way in hell you’ll be able to survive without looking at a map everywhere you go, you directionally challenged fool you.” She had scoffed at that and threw her now-empty pop at Deyre, causing them to both break out in laughter. She sniffed. The memory was still fresh, slicing open wounds that she felt would never get the chance to heal.New York never had many trees, let alone ones like these, a mile tall and just, green. The entirety of a tree next to her was green and covered in a slimy, fluffy looking mold. She had no idea what it was, but as she breathed heavily and nearly keeled over, she reached her hand out and touched it. It was soft and in that moment, she wanted nothing more than to lean down in it forever. Looking up from the leaves crackling beneath her feet, she glanced around.

The application said “follow the trail until the pond on the left, then take a right and walk one hundred paces.” I did that, and the house isn’t here?! She groaned in frustration, and her face began sweating. She shook the thoughts out of her mind and set herself on the track of retracing her steps. Her breathing quickened, and Vinnea found herself getting more lost than not.

She grabbed at the trees around her as the feet beneath her moved as fast as the brush would let them. She grasped and clawed at passing trees, hoping they would shoot her forward, closer and closer to the edge of the woods, to the house, to anywhere that she knew how to navigate from. The trees seemed to loom in and tower over her, causing her breathing to become more rapid and her focus to falter. She felt her eyes burn as the tears started to fall. There was no 10-foot high concrete wall to climb up to avoid this. The trees now seemed to mock her.

“Vinnea can’t navigate…” They seemed to screech. “Vinnea doesn’t know anything about life outside of New York.” “She should’ve just stayed there, then she wouldn’t be such a burden to everyone in her new home… as if she’d ever had an old one to begin with…”

STOP IT she wanted to scream, but she knew that it would do no good. She was lost in the woods, alone, with a faulty map and no food. She slowed down her erratic sprinting and nearly collapsed in front of one of the big trees surrounded by the green stuff and bushes. The tears never stopped flowing.

Eventually, she sniffled and rubbed her eyes til they were red and raw, taking in a few last shuddering breaths before getting up slowly to keep walking. As soon as she had taken a step, however, she hears a twig snap somewhere to her left.

“Who’s there?” She barely managed to croak out, wishing that in that moment she had never stood up.

“Ah, hello!” The voice sounded feminine and relieved. “It’s not every day you meet someone else in this forest! Do come help me, would you? I’ve been waiting all day for my dear friend Angeline’s daughter, Vinnea. Say, did you see her?” Vinnea’s heart palpitated and she started making her way through the bushes to find the voice.

“Mrs. Joyce?” She hesitated as she came in sight of the older woman on the path. She was wearing an ankle-length everyday dress with a orange shawl and a rather plain-looking hat. She looked well into her 60s, though her voice betrayed her soul to be much younger. Vinnea herself now felt inadequate, wearing only a knee-high skirt with a buttoned up frock above. The woman blinked, then broke into a smile.

“Ah! So you must be Vinnea then. Well! Good thing I ran into you before sundown.” She began to walk farther down the path, leaving Vinnea still standing in the bushes. “Do try and keep up, would you?” Vinnea blushed, dusted off her frock, and hurried to catch up with Mrs. Joyce. “I’m sorry about the map by the way, I forgot to send an updated version.” Vinnea stopped in her tracks and blinked in surprise as her eyebrows furrowed. Mrs. Joyce looked at her and broke into a laugh. “I moved last spring, the old house has surely been taken by the forest by now…” She turned back and continued making her way to the cottage.

Vinnea’s clouded mind cleared for the first time all day. Everything had started to make sense now. Pulling the paper with directions out of her frock, she crumpled it up into a ball and turned to continued to follow Mrs. Joyce down the trail. 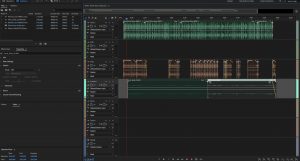 Behind the scenes, we worked on our audio using Adobe Audition, where we added sound effects and ambient noises.
For this website specifically, we made custom illustrations for the banners. I created these using Adobe Illustrator. The assignment was to create 4 banners, somewhat related to the Narrative story we cultivated in all 3 classes. 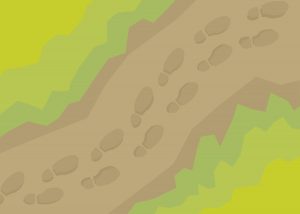 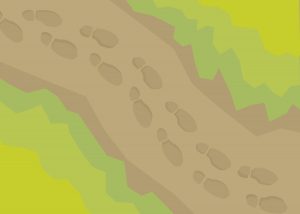 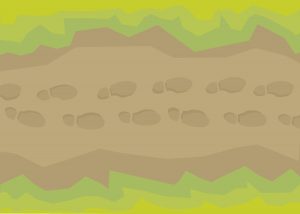 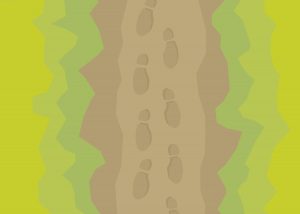 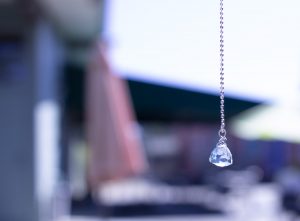 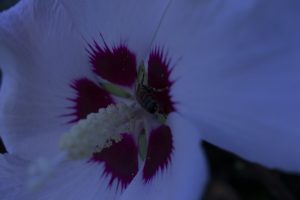 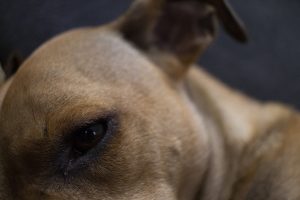 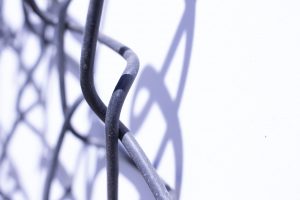 Here are some examples of Macro (close-up) photography we did in Design class earlier this school year. Our assignment was to take photos of a variety of plants, animals, objects, etc. and catch the close-up details often missed at a first glance. I felt challenged during this project because I had to think of more creative ways to photograph something and think of more creative things to photograph in the first place. I greatly enjoyed this project, as it taught me how to effectively use my camera and find the exact right angles that I wanted. I also learned how to edit photos effectively using tools on Adobe Photoshop. 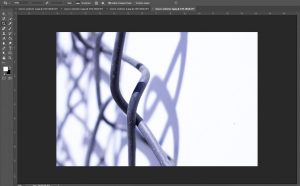 After working on photography, we began to work on and understand color theory as well as the correlation and significance of Positive-Negative spaces. For that, we cut apart pieces of craft paper and stuck them across an axis halfway through the page. In another assignment in which we studied how to blend colored pencils correctly, we chose a 5-color palette and drew the tints, tones, and shades ranging from almost white to black. We then blended the colors together in a spiral-like fashion. In yet another colorful assignments, we blended watercolors to make neutral tones and show the relations between complementary colors, such as red and green.
After doing these studies, we began to work on the largest project yet: the Visual Narrative. Using the short stories we wrote in English class, we further developed our characters’ personalities in Design, but with a twist. Using the main characteristics of our character, we used animals to symbolize each characteristic. Further developing, our character was then characterized into a compound of 3-5 animals. To create such a creature, we compiled photos off of DuckDuckGo and edited them together in Adobe Photoshop. 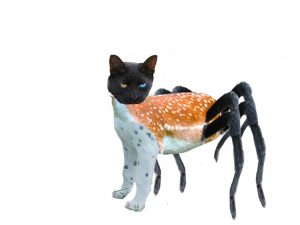 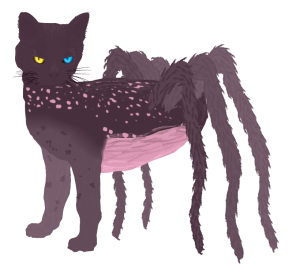