For the past couple of months at Freestyle, each class has taught us different & unique ways to tell a story and express ourselves and our ideas, visually, within those stories. With the help of teachers and industry partners, we have developed multimedia presentations to present our findings in exhibitions. Throughout this narrative unit, we have all grown in the necessary writing, speaking, and research skills that we will need in college, but also have learned critical communication skills that help us express our ideas in exciting and original ways. Every lesson that has been taught in our three classes (Digital Media, English & our elective), have all tied together in engaging, yet challenging ways.
This unit has brought me just as much failure as success and that it what I have valued the most. Throughout the unit I faced difficulties that I was not used to facing in high school but they all have taught me more about myself, my work and those around me than any other challenge before. I have gone from only knowing how to express simple stories to digging deeper and finding connections with the world around me and the stories that I want to tell. I am grateful for all I have learned this unit and I cannot wait to take this new knowledge and create more, better projects in my future.
“The greatest art in the world is the art of storytelling.” – Cecil B. DeMille
The assignment in English was to create and write a five page maximum narrative story. We were instructed to create a character and a conflict that our character faces throughout and eventually resolves at the end of our story.The inspiration for my story came from all sorts of different places. I wanted to revolve my story around a young adult who suffers from anxiety because I feel that anxiety is something that so many people can relate to and it should be highlighted shown in stories more often. I also wanted my story to have a more mysterious tone because I find stories involving mystery very engaging and entertaining so the inspiration for my story came from a mix of my favorite television shows and movies.I produced the audio version of my story through uploading myself reading the story to Adobe Audition and using sound effects from the Freestyle collection to make my story come to life. I greatly valued turning the writing of my short story into an audio version because not only did it teach me how to use Adobe Audition, but it also taught me how much more engaging a story can be when it is brought to life with sound.

Behind the Scenes of the Short Story Audio 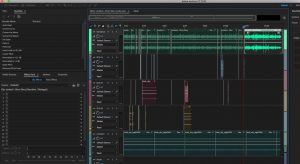 This image shows the process of putting music, sound effects and ambient noise over my recording of my short story, using the application, Adobe Audition CC.

This piece was created with the paintbrush tool on Adobe Illustrator. I was stuck when deciding what to do so I just decided to hand draw my brain. I added three words within my brain; love, stress, and dream. Those words came to me without thinking and I put them in. I valued this project because of how much freedom we were given. I enjoyed taking images from my head and putting them on the computer screen.

The following are screenshots of the process I took in Adobe Illustrator to create my personal illustrations and my banners. 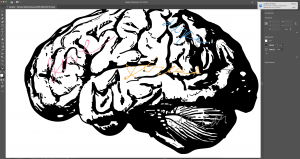 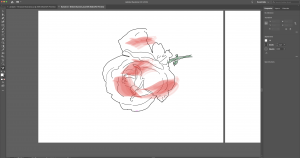 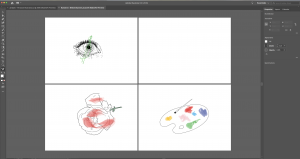 What were you challenged to produce? In the narrative unit in Film at Freestyle, we were challenged to create a short film that followed the three act story structure and contained no dialogue. We were given an immense amount of freedom during this project, we were given the chance to create and pitch our stories to the class for feedback, collaborate with partners, create artboards, cast and find locations, film and edit over the span of 4 months.

I would love to thank Mr. Taylor for teaching me everything I know about film and all of my teachers at Freestyle for always being supportive and for making my junior year of high school more enjoyable than any year so far. I would also love to thank my film classmates for the supportive and encouraging feedback and for helping me throughout this process. Finally I need to thank my incredible family for spending countless hours with me over the past couple of months, putting their time, effort and money into helping my partner and I create the film that we envisioned.

Without further ado, I hope you enjoy my final work and the crazy process it took in order to complete them.

A synopsis is a page-long description of our film from beginning to end. We submitted our synopsis’ following our pitches to the class in November, so you will notice that the synopsis is very different from the final product. Below is a link to a PDF of my synopsis or “rough draft” of my story. JordanS – Narrative Synopsis

Storyboarding is a very common practice that is used in many major film production companies, such as Disney, Dreamworks, Sony, etc. Storyboards are sketches of your film, shot by shot, to give you an idea of what works and what does not. We were challenged to create storyboards for every shot of our film in 100 notecards and more. Here are our storyboards below: 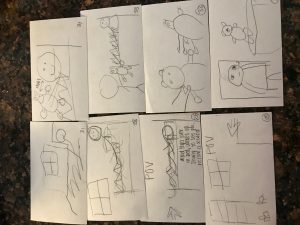 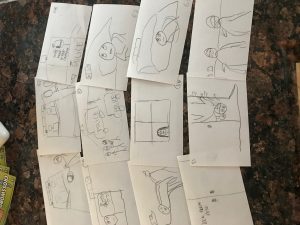 All of our work in pre-production (synopsis, storyboards, etc) helped us create our film as a whole. Below is our final product of my Junior Narrative Film.

Below are screenshots from my editing process in Adobe Premiere. 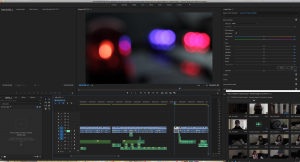 D.W. Griffith is one of the most influential creators in film history. He is responsible for creating a variety of rules and techniques in film that have been respected and followed to this day. The technique that we studied the most in film class at Freestyle was “Griffith’s Pattern”. Griffith’s Pattern is used in film to introduce characters, setting and conflict by starting outside of the setting and moving in, shot by shot, until you end with a close-up of your characters. Mr. Taylor challenged us, in a group of 4, to create, film and edit a scene using Griffith’s Pattern, without sound, in under 1 hour. Here is the product of what my group and I created:

Chase scenes are oftenly found in film, from features to shorts, they create exciting and intense scenes for the audience. Mr. Taylor challenged us to create our own chase scenes with original plots. We were given a couple of days to create, film and edit our scenes. Here is the product of what I created:

After an in-depth lesson on suspense and its importance in certain films, Mr. Taylor challenged us, in groups of 3, to create, film and edit a suspenseful scene, with no sound, in under 1 hour. This lesson definitely taught me the importance of turning off “Auto Focus” in our cameras because that was one huge mistake we made in this short time period. Here is the product of what my group and I created: