For the Conceptual Project, I had to develop my abstract thinking and communication skills to answer the question,

“How Can I use Unconventional forms to express myself?”

This unit emphasizes creative risk-taking through poetry, music, art, animations, experimental film and web production, forcing me to think deeper and make thing as crazy as I can think of. To do this, I begin learning a variety of modern professional equipment and applications such as Adobe Photoshop, Adobe Premiere Pro, Adobe After Effects, Apple Final Cut Pro, Avid Pro Tools, Autodesk Maya, and Google Apps.

Our first major assignment was our photo haiku. This assignment spanned all of our classes. We started in English where we were given a random concept statement that we would have to write a haiku about. This statement followed the format of, “I am exploring the feeling of _ through the experience of _” and we would draw an emotion and experience from a hat. My concept statement for my Haiku was,”I am exploring the feeling of defensiveness through the experience of the quick passage of time.” I had a hard time trying to convey these emotions in haiku form. In addition to having to do that, we also had to reference a season, and have a “kugo” or cutting word to have a twist. This assignment made me have to really think to complete it. I ultimately settled on someone trying to defend their ideas because they are doing a project last minute.

I really valued this unit because it forced me to think out of the box, I had to rethink most of my projects instead of just going with my first idea. This unit not only taught me how to be more expressive, it also learned how to use many different applications that I will be using for the rest of my Freestyle career.

These are two other poems we had to write for english. They did not have to be about my concept statement. The First one is my project poem, which was a poem that we had to write and then read to the whole class. The second poem is whats called an ekphrastic poem. An ekphrastic poem is when you write a poem in response to a work of art. We went to the SF MOMA and had to photograph and write about a pice of art that we saw. I chose to write about a printer that was constantly printing the news, because I saw it as a good metaphor for the internet and social media.  I really tried to convey the emotion of irrational anger in the speaker, and then having the speaker talk them self out of it.

An exquisite corpse usually refers to a picture drawn in a specific way. It is an abstract group activity where +someone would draw the head of an animal, the next person would draw he torso, without seeing the full head, and someone else would draw the legs without seeing the other two parts. We did an exercise like this in English, where we hd to write a poem by passing around a piece of paper and writing it line by line. We only got to see the previous line of the poem. We later used Adobe After Effects to make the poem into a video with an image that represented our line of poetry. 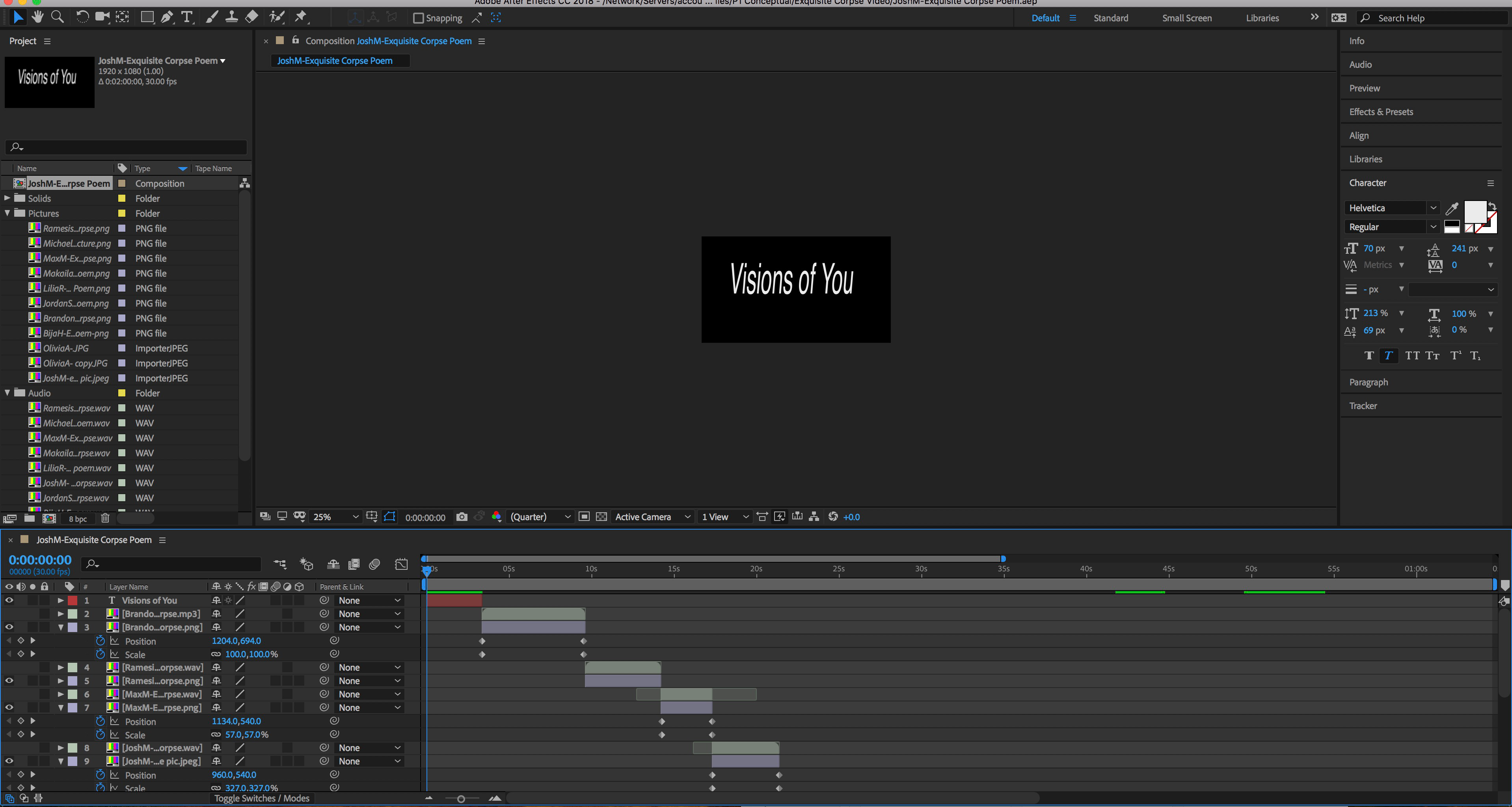 This is a screenshot of my work board on After Effects. I Value this project because it showed me how to use a different video editing software from Premier. Unlike Premier, After Effects can be used almost entirely with keyboard shortcuts, and that was a fun little challenge we did with this project.

Blend modes are a way to edit photos in Photoshop to bring out colors. They work by changing the color values of each picture by putting them though an equation. How we did this was by applying the blend mode to a photo we took, and then duplicating they layer over and over again until we got a picture that we liked. 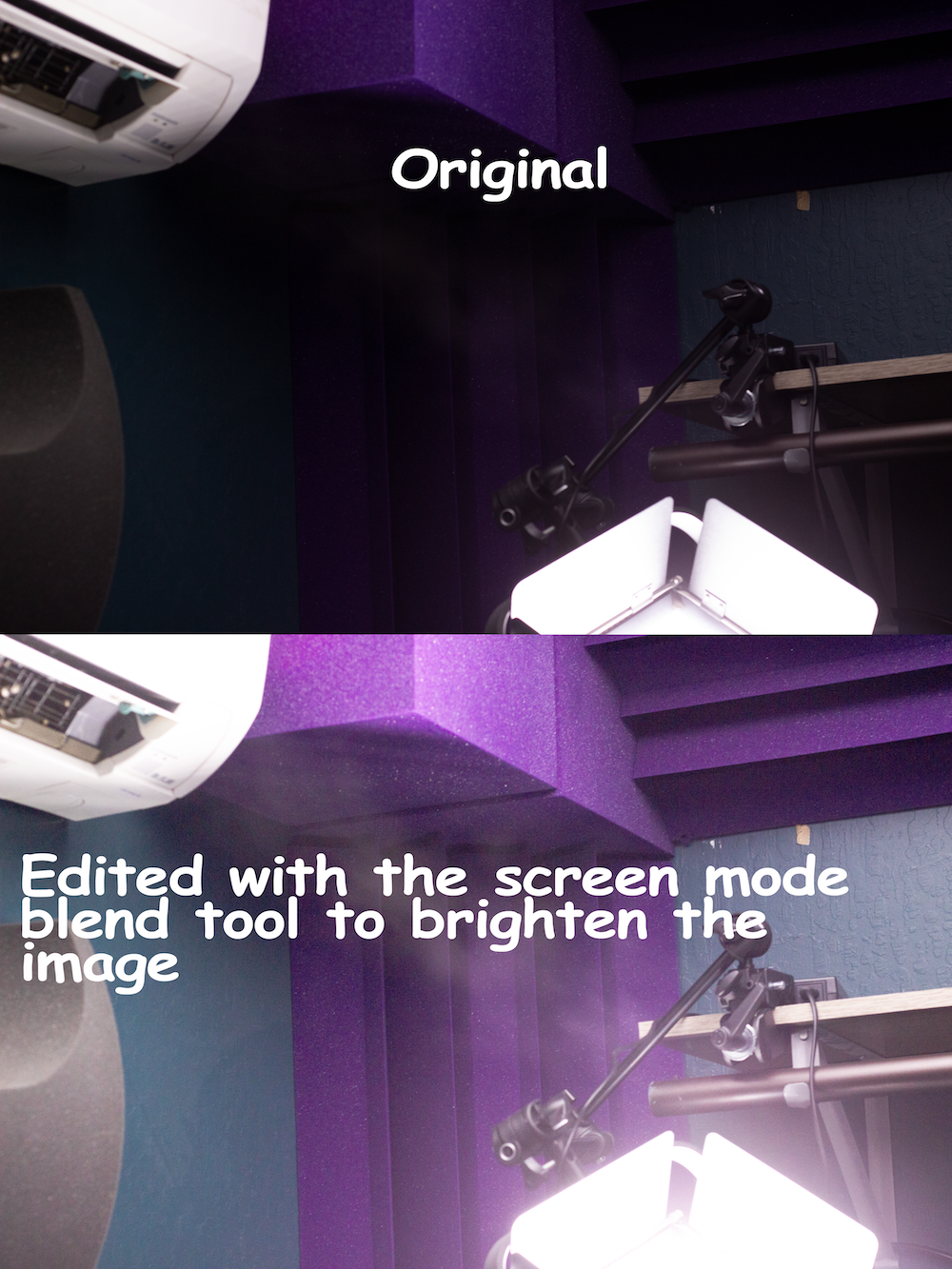 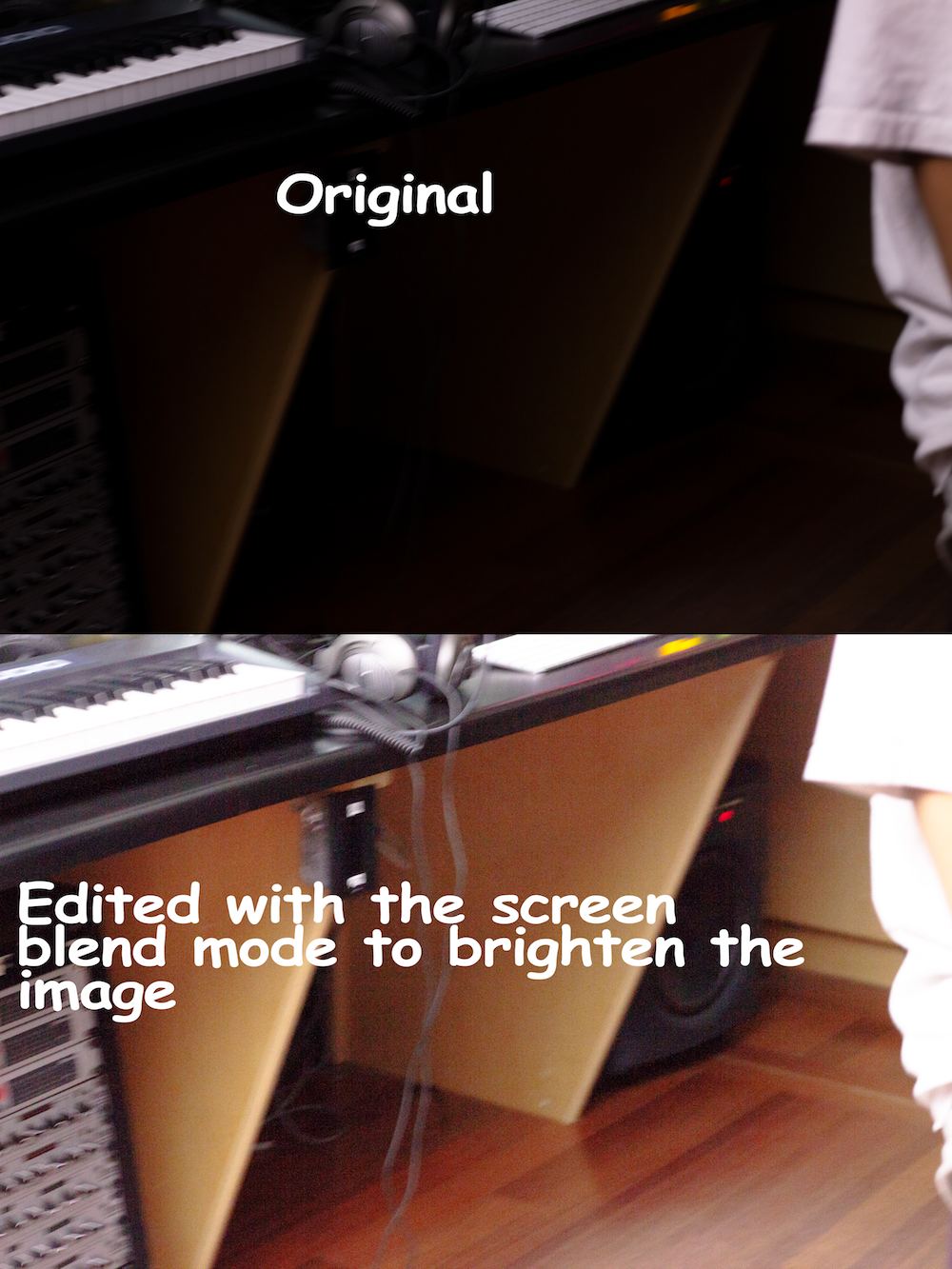 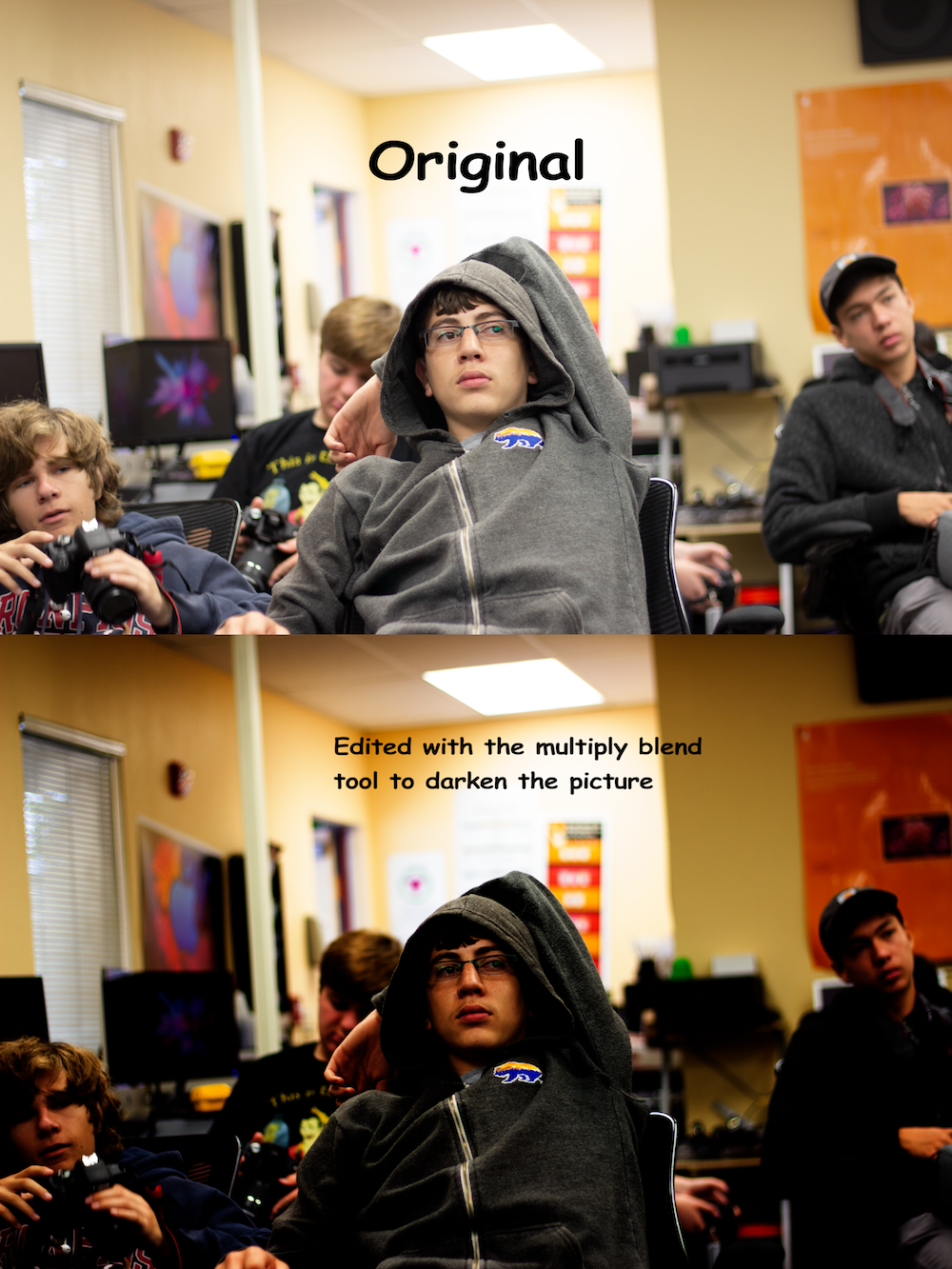 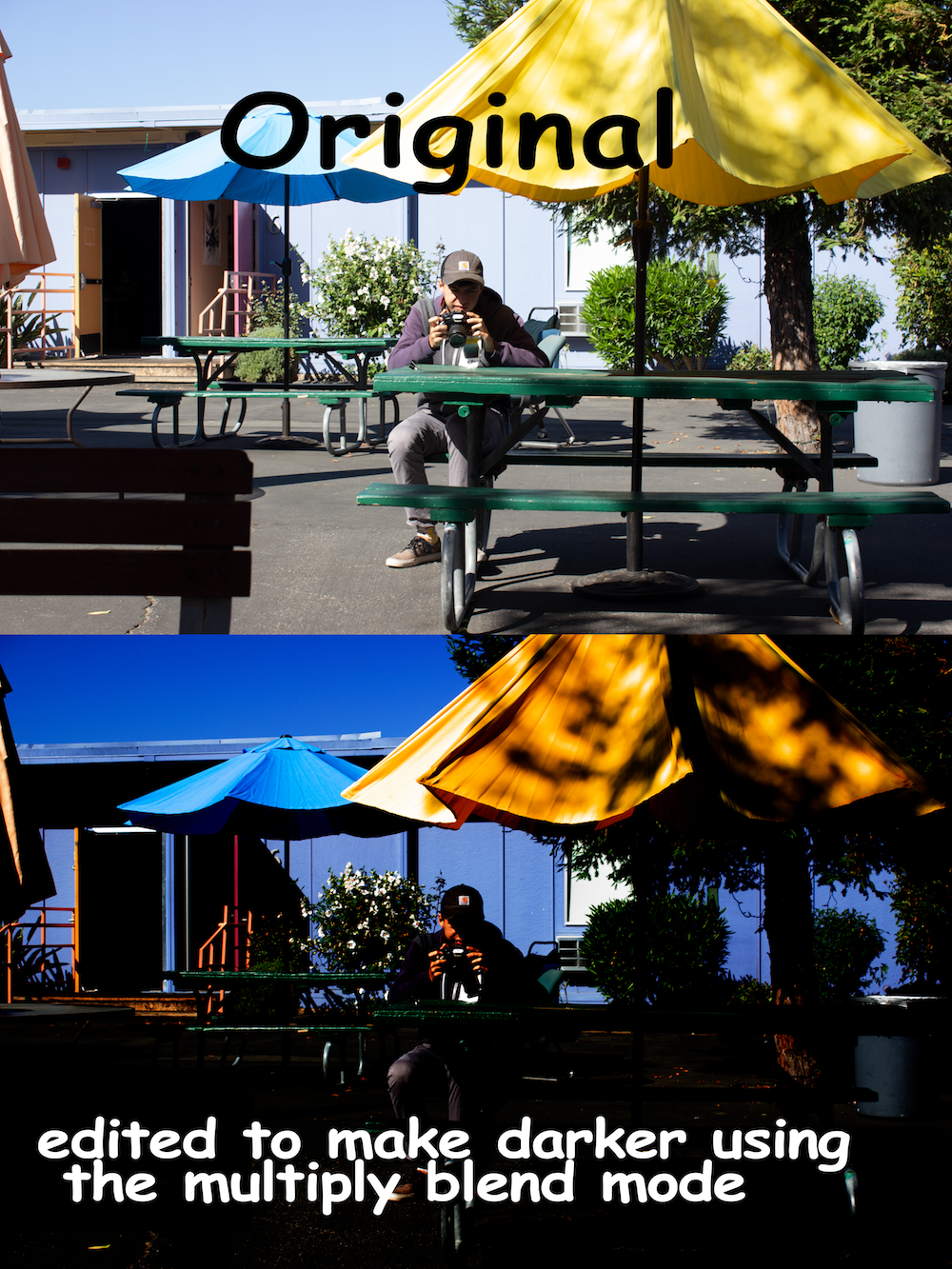 As part of this project, we also had to take our own photos. I value that because it taught me how to use my DSLR camera and change the settings on it to change the picture.

For this assignment we had to make a film that conveyed our concept statement, but it had to be experimental. That means that there is not plot, and no real characters. 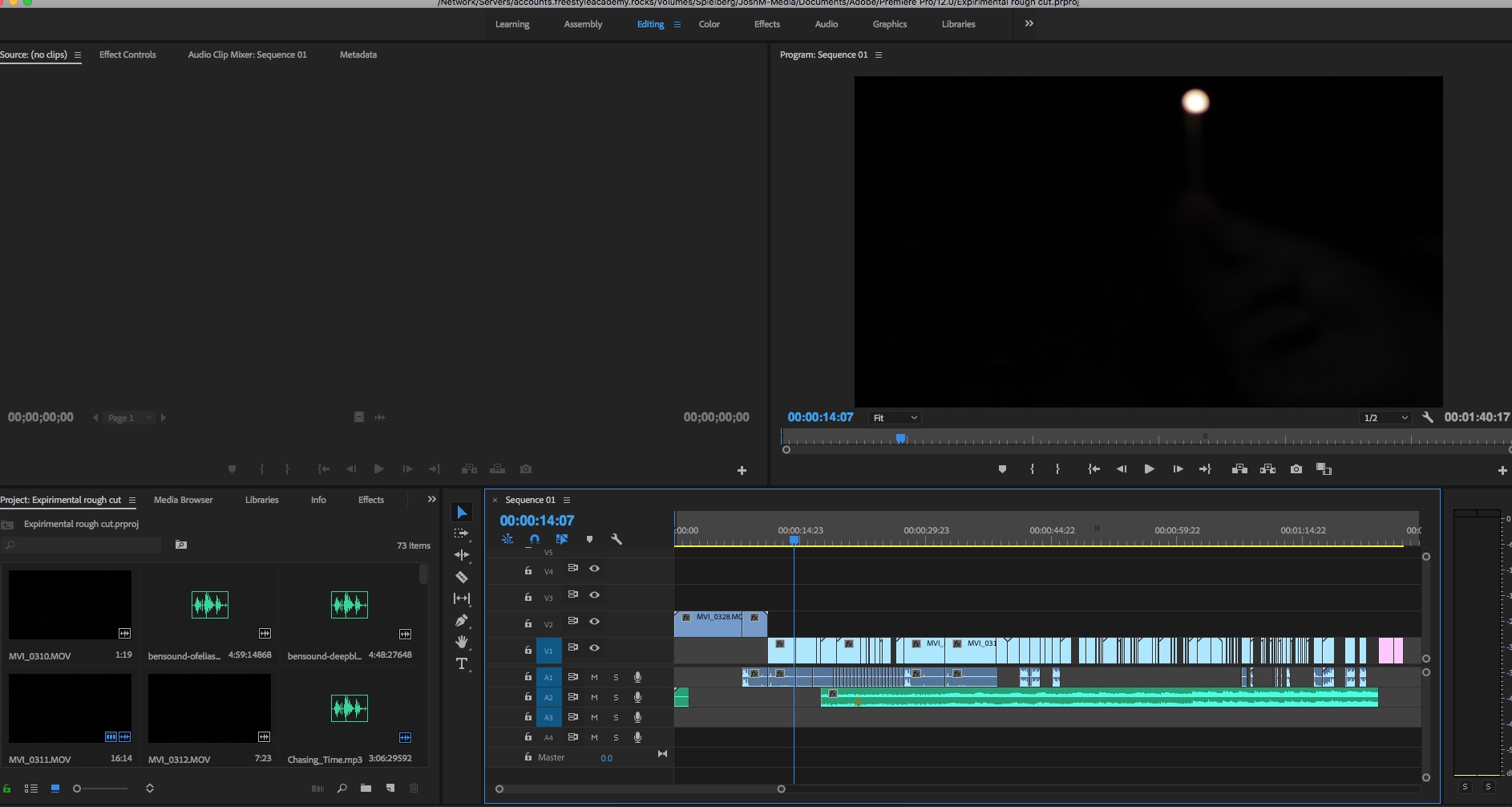