The Visual Narrative portion of freestyle academy is mainly focused on narrative and design. We worked a lot in Adobe Illustrator to create personal images and worked a lot with narrative images to create a more cohesive story. Honestly I didn’t really care too much about this portion of my freestyle journey so far because I don’t particularly enjoy telling stories. But it made me learn about hot to pace a good narrative and what to look out for in a good story which could be useful in my future if I become a book-reviewer or something.
The assignment in english was to write a sort story that followed the standard narrative beats in order to make it satisfying. The inspiration for my story was the idea of an inconsequential death that sends a town into a complete rut. I was originally going to base it on our school librarian but the idea of her dying would be a little depressing so i decided to make it more lighthearted. I used one of the microphones that I had in my closet and attached it to a zoom recorder and then I hunkered down and read all of the dialogue. I valued writing the short story but I don’t see the point in making an audio version with sound effects, although I thought it was fun making a soundtrack for the audio book so I guess the musical aspect was my favorite part of that experience.

Here’s the story in full:

The Death of Patricia Coleman

December 25th, 2003: Long time resident of Kettleman City Patricia Coleman was found decomposing in her armchair this morning at 7:45 when the paperboy, who was attempting to bring to light her overdue payments, happened to peek through her window after she failed to answer the door. The boy promptly began screaming upon sight of the severely decomposed and bloated old corpse which led to the contacting of authorities and a brief search of Patricia’s house. The search turned up fruitless in terms of identifying any insidious action executed against Patricia but her cat, Mr. Mistoffelees, was found dead as well on the kitchen floor due to prolonged starvation. Authorities attempted to get hold of Patricia’s distant cousins whose phone numbers were found stashed away in an innocuously placed pringles can, though none of the people contacted stated they had seen, knew, or even heard of Patricia Coleman despite them sharing the same name. Not even a cousin living directly across from her, Jackson Coleman, knew that she had existed or that her parents Mary and Edward Coleman existed as well. With no relatives making a claim on her body, Patricia’s corpse was handed over to the city mortuary.

December 27th, 2003: An autopsy of Patricia suggested that her death may have not been brought about by the previously perceived notion of natural causes, but perhaps an accident in which on of her psychiatrists might have given her the wrong type of medication. The evidence: a clear orange pill-bottle with the false name of “Patricia Goleman” written on it. Which could have been seen as merely a typo had a dead Patricia Goleman not shown up at the mortuary seven days prior.

December 28th, 2003: Accident or not the perpetrator was found to be 21 year old Jessica Slawnsworth who was on the throes of finishing her medical degree at KMYU at the time and whose alibi was “I was super stressed and tired and stuff”. Her father went on record to state “That person you keep referring to as my daughter, I don’t know her.” And her mother cried uncontrollably in the courtroom. Following the trial she was promptly kicked out of KMYU and sentenced to 5 years in the Kettleman City penitentiary for third degree murder of two subjects where she later was found attempting to hang herself with a roll of three-ply toilet paper.

January 4th, 2003: The Kettleman City mortuary went through significant downsizing issues at the time due to the lack of people dying in the town leaving its corpses on standby for six days while the city collected funds from working farmers in order to pay for burials. Today, several rotting corpses were discovered in small Seven-Eleven Ice Boxes all over town including that of Patricia Coleman and Patricia Goleman. When investigated further it was found that 56 year old mortuary employee William Blair was to blame. Blair explained that the generator died early in the morning because a dead crow fell out of the sky and cut the power lines leaving their walk-in refrigerator to break down, so he compensated by stuffing dead bodies in Ice Chests he found outside. Due to his Coroner’s Licence no charges were pressed against Blair except for a fine of ten dollars to each self-proclaimed “victim” in the town. Over one-thousand “victims” demanded money from Blair causing the already poverty stricken coroner to now live in a tent on Dust Rd.

January 10th, 2003: Authorities finally gathered a collected pool of three thousand dollars for Patricia Coleman’s burial. The funeral was arranged to be open casket but with all the money put into paying the plot digger Grimes Johnston and reverend Jack Vallejo for the christian services there was none left for a casket. The city instead went for a deluxe-sized IKEA bag with a sewed on zipper so as not to stink up the chapel with the smell of rotting flesh. The funeral was set to take place on January 14th but it was set back to January 21st after Vallejo contracted food poisoning from a glass of ice water he had six days ago and Johnston was struck by lightning in an attempt to finish Patricia’s grave during a particularly violent desert hurricane. Both Patricia Coleman and Grimes Johnston’s funerals would be held on the same day.

January 21st, 2003: Through a freak accident involving the rearrangement of many ID Tags during the mortuary’s downsizing and a wrongly suspected typo, the body of Patricia Coleman did not show up to the funeral on this day. Instead it was discovered to be buried fourteen days ago and in its place lay the body of Patricia Goleman. Reverend Vallejo was particularly peeved about this because now he had to adjust his sermon to fit the new corpse. Before the service was set to begin, Vallejo called in with another case of “food poisoning” and wasn’t seen again that day, a twelve year old Good Samaritan named Susie Sue was sent up to take Vallejo’s place. When the relatives of Patricia Coleman were asked to stand in prayer it was found that only Jackson Coleman had shown up, a relative who would later be found out to belong to a different lineage of Colemans, and he was fast asleep in the pews. Ultimately the service reached an abrupt close after Susie’s mother came to take her to Soccer Practice. Afterwards, Johnston’s ashes were spread across the great valleys of the Mojave Desert with several eager relatives standing by, crying, laughing, and cheering for their beloved cousin. And Jackson Coleman was left burying an IKEA bag in a half-made grave plot containing the body of a mis-identified relative whom he had never met and would never remember that day after.

The custom illustrations I made for my banners (shown above) were designed to be as minimal as possible since I hate website banners. So if you’re wondering why all the images are blurry it was an intentional choice in order to make the text more visible because the text is really what’s important. 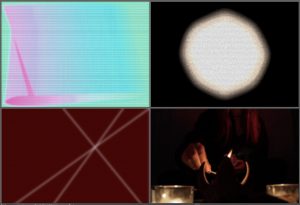 These are the banners in full. The last one is an image from my student film called “GARY” that is shown below. I mostly used a lot of the particle generators in Adobe Illustrator because it’s really fun to mess around with. And I applied a gaussian blur to each photo to make it look fuzzy. There was also a personal illustration project that we were assigned that I thoroughly enjoyed due to the fact that we could do anything with it. So since I’m a big South Park fan I decided to create me and my friends as South Park Characters and place them into a fictional “Mountain View”. Not to brag but I’d say the results were pretty good! 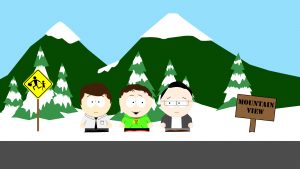