For the Conceptual Project, I developed my abstract thinking and communication skills to answer the question,

Through this project, I learned how to take creative risks through my work in Design, Digital Media, and writing poems in English. This challenged me to express my opinions through creating art, as well as helped me to begin developing my skills in technical communication. Throughout this project, I used professional equipment and applications such as Adobe Photoshop, Adobe Dreamweaver, Adobe Animate, Adobe Premiere Pro, Apple Final Cut Pro, Avid Pro Tools, Autodesk Maya, and Google Apps.

During the Conceptual unit, I learned a lot of important skills that will help me in the future. In English, we wrote many conceptual poems, and this helped me develop and show my ideas in a metaphorical and non-cliche way. For Digital Media, we created a video that would go with poems we created in English, as well as learned the basics of many professional applications. Finally, in Design, we created a photo using two objects that would represent a concept statement, which helped me in thinking more creatively and looking at things from a different angle.

For this project, we were given a concept statement in English, and we were to write a haiku showing that concept. The concept that was given to me was “I am exploring the feeling of gratitude through the experience of taking a risk”. After writing the haiku, we took photos that would go with them, that could metaphorically represent our concept. Finally, using the haiku and the photo, we made a short video in Digital Media, showing the poem and using Premiere Pro.

Overall, this Photo Haiku and Photo Video Haiku project really helped me learn about how to express my ideas in a more metaphorical way through language, as well as how to use an image to enhance the language. What I really valued about this project was the fact that I began to learn about how to express myself more creatively, through the use of metaphors and imagery. 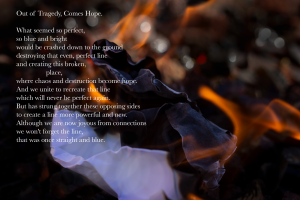 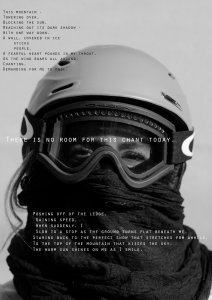 An Exquisite Corpse poem is a poem that is made with a group, where one person writes one line of the poem, and then it is passed to the next person to write the next line. However, as the poem continues to get passed around the group, only the one previous line can be seen. This makes a poem that is very creative and can sometimes make no sense. An Exquisite Corpse is a collection of words of images that are collectively assembled.

What I value the most from learning how to exhibit poetry in different mediums is how the different mediums can strengthen the poem in different ways. Depending on how I want someone to interpret the poem, I can use imagery, audio, video, or just text. I especially value how I was able to use my creativity freely, and learn how to develop my skills in different art forms.

A Photoshop Blend Mode is where you combine layers of an image to change on the image based on the Blend Mode selected. For Multiply, the image will be darkened, which can help edit overexposed photos, and help in bringing out the detail in the image. Using Screen, the image will be brightened and it could help with brightening a dark photo. Using overlay, you can brighten or darken certain parts of the photo, bringing emphasis to the image. Finally, with multiplying two images together you can lay them over each other and create a more interesting image overall. In this project, we tries all of these things with many different images. 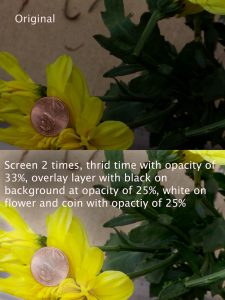 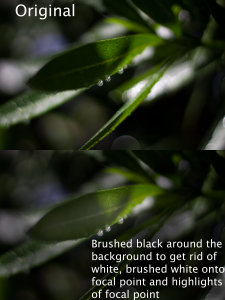 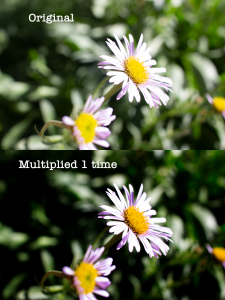 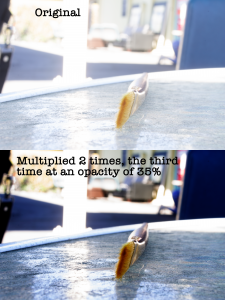 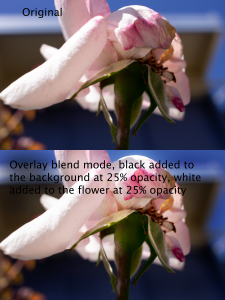 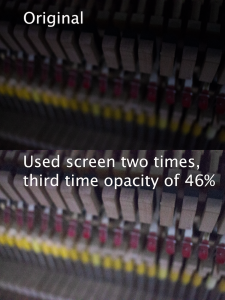 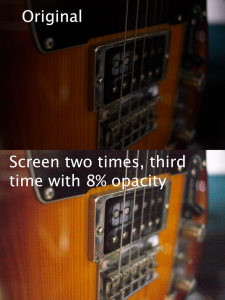 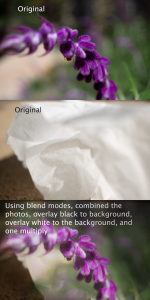 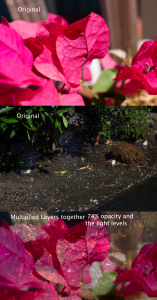 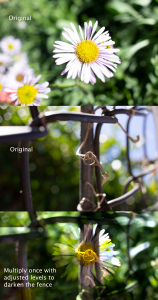 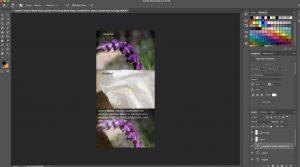 Through creating these Blend Modes, I learned a lot of the main uses of Photoshop, and these skills have helped me in editing other photos and will hopefully help me in editing more photos in the future. As well as learning a lot about Photoshop, I have learned the basics and necessities of using a DSLR camera. Learning how to use aperture, ISO, and shutter speed together is necessary for taking a good photo, and I am thankful that I have begun my journey to mastering these abilities. Skills in Photoshop, as well as skills in the use of a DSLR camera, will help propel me forward in my hopes of one day going toward an art related career.

In Design, we were given macro pancake lenses for our DSLR cameras and assigned to take many photos, so that we could choose and edit one of them. A macro photo is a photograph that is taken of something close up so that you can see many of the details within the photo, and if done correctly, can create very interesting photographs.

Through this first project, I wanted to push myself to take interesting photos whether it was through the subject, or through the composition of the photo itself. I took over 700 photos in this process, eventually narrowing my best photo down to this one, as it had the most vibrant color.

In Photoshop, I changed the curves a lot, so that the contrast would be high, and the interest in the photo would be better. I also made a selection of the grapes, so that I could increase the color of the foreground and add a color filter of blue on the grapes to create better colors. Through my use of Photoshop, I tried to increase the contrast between the foreground and the background, so that the viewer’s eye would go straight to the grapes. 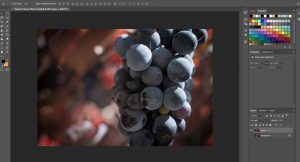 In Design class, we once again went back to the conceptual statement that we were given in English, and were assigned to take a photo of two inanimate objects together that metaphorically represented the feeling and the action of our concept statement. For me, I had to find two objects to represent gratitude and taking a risk.

I am exploring the feeling of gratitude through the experience of taking a risk.

In my photo, a penny balancing on a yellow flower is depicted. The purpose of the penny on the flower is to bring balance to the image of the flowers on one side and the penny on the other. The lighting of the image is coming from above the flower because I wanted the lighting to kind of be a natural light to reduce the reflections of the coin. The purple of the background makes the yellow flowers pop a lot more, and attracts your eye towards the subject.

The flower represents gratitude in this image because flowers are something that people send to others when they want to show that they care or show thankfulness, and yellow is the color of flower that represents gratitude. The coin represents taking a risk because when someone flips a coin, he or she would be calling heads or tails and taking the risk of choosing what comes up. In the image it looks as though the penny could fall anytime, further showing the risk of the penny balancing on the flower.

In my process of Photoshop, I brighten the image using a screen on a layer and using overlay modes to darken the background, as well as using a violet photo filter on the background to increase the contrast. I made multiple selections of the photo, on the flower, I used it to change some of the curves. Finally, on the coin, I used the selections to increase the contrast and changed the curves of the penny. On the left side of the flower, I used a soft round brush at 4% opacity and colored with the same violet as the photo filter. I did this so that the side of the flower would partially blend into the background and bring more focus to the coin. 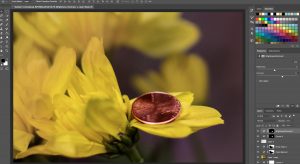 Through these projects in Design, I learned a lot about using a DSLR camera to take photos with different lenses and how to use different tools of Photoshop. What I really valued though was that I was able to learn not only how to take good photos, but how to communicate through them, and that I can use Photoshop not to change the photo, but to enhance it and emphasize different parts. I am very proud of these first two projects because I pushed myself to make them the best that I could, even though I had never really tried photography before. I hope that throughout the year I will be able to develop my skills as a photographer and as an artist overall.